STELLA by Muna Tseng Premieres in New York on May 5

Posted on May 2, 2011 by adminbena
Choreographer Muna Tseng’s latest work, STELLA, channels her late mother through relics and memories. She talks to Katy Gray from Bomb magazine about family history, the New York art world of the ‘80s, and identity.

Muna Tseng’s latest work, STELLA, grew out of the clothes and personal articles she inherited from her mother Stella and into a historical fiction of sorts, a meditation on how those left behind must fill in the blanks. In her West Village apartment, at her mother’s Arne Jacobson table and chairs, we talked about the show, New York’s past and present, and the objects themselves—the heavy jade ashtray bearing a mermaid in its curve with which she once tried to brain her brother, the bottle of unopened cognac given as a goodbye present from Hong Kong, the “kissing stole” that brushed against her cheek when she was tucked in at night, the blue and white china, and, of course, the dresses. (Below is an excerpt from the interview which can be read in full at http://bombsite.com/issues/1000/articles/5033) 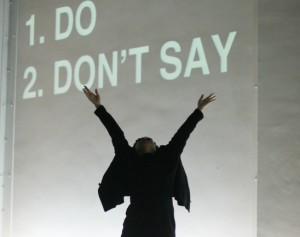 KG I don’t know much about modern dance. But I do have a mother. And your new piece, STELLA, is all about yours.
MT Well this piece STELLA, is a good piece for us to talk about because, besides dance, it’s art installation and performance. I’m using contemporary art practices and postmodern dance. The dancers are dressing up á la Cindy Sherman. They put on my mother’s 1960’s Chinese dresses, very tight form-fitting Cheongsams, we reference Wong Kar-Wai’s film In The Mood for Love. My dancers put on wigs and sun glasses and Stella’s furs, her purses, gloves, to channel Stella. We’re asking questions like: what is family history? How do we construct our history?
KG Can you tell me about the installation? Did you work with any other artists or curators?