Posted on April 8, 2015 by adminbena
Tonight on April 4, 2015 I walked the streets of downtown Los Angeles. I was walking down Spring Street on the night of the full moon and a lunar eclipse. I’m not surprised that it was a night of discovery, of the unexpected, of something new. 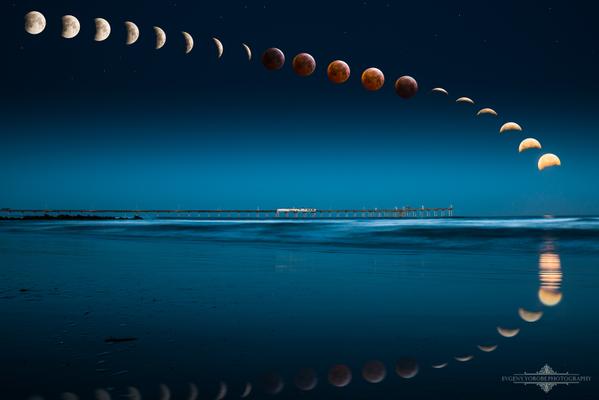 I walked into the Howard Griffin Gallery into the exhibition of “Pablo Delgado: On Their Level.” 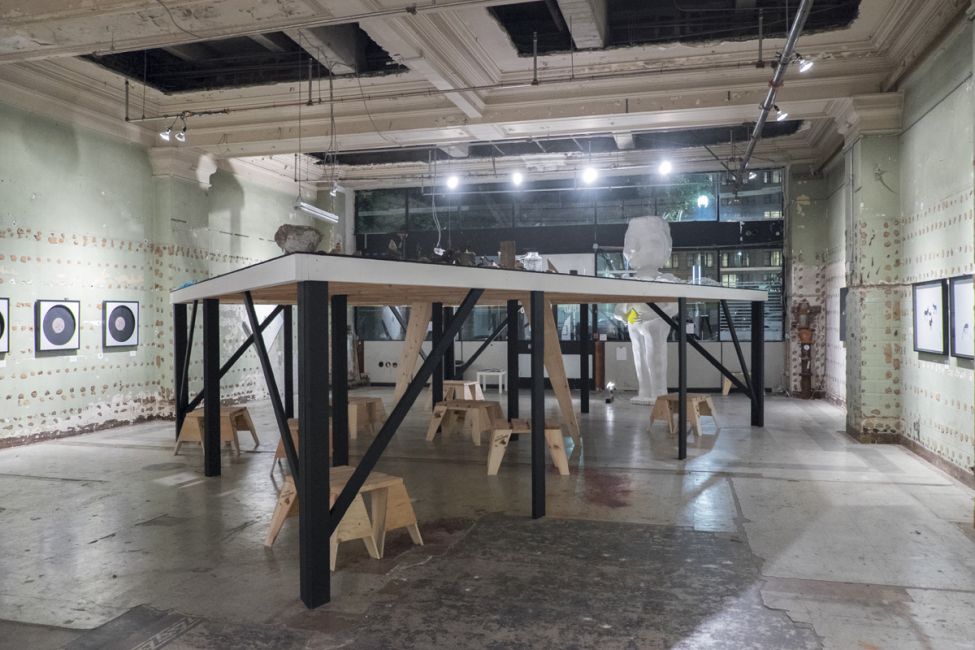 The gallery itself is the art with chipped walls, exposed beams and ceilings, wires, and pieces of little stones throughout as if it the space itself had been bombed or terrorized or simply decayed. This is the world as accidental dystopia. The end times. As you go through it, piece by piece and revelation by revelation, you see four of five epic signature works that seem to intrude astutely right into your vision as if they always belonged there. 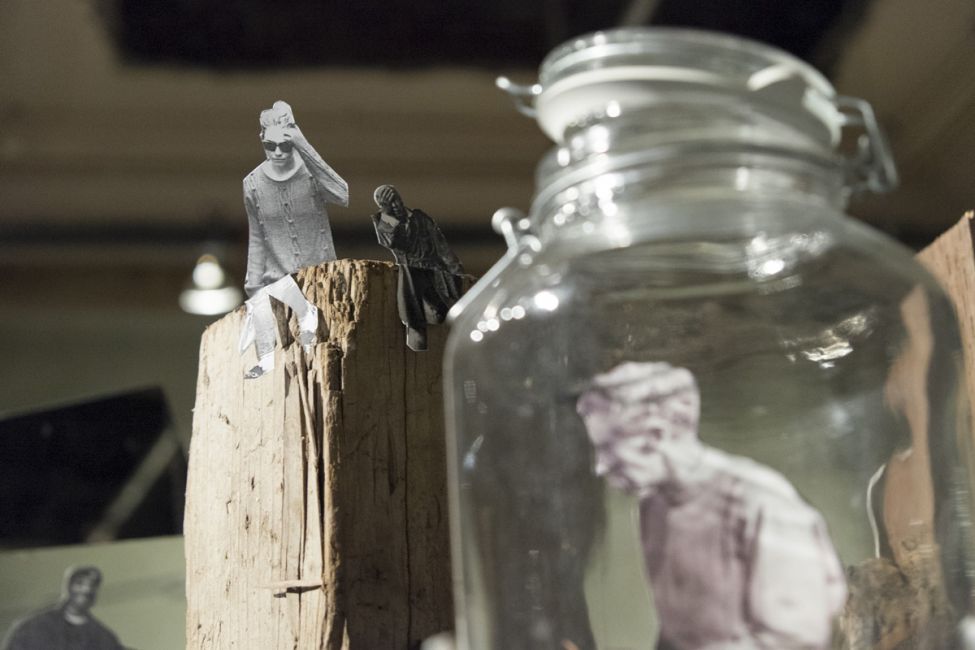 Mirrors are placed over some of them and reflect a reality or scene you didn’t see on first glimpse. There are multiple and parallel prismatic views of the world. We only see what we are accustomed to seeing. Our programmed viewing habits get in the way of seeing of what is really there and what is actually before us. Delgado exposes in the most subtle way the taking in of the totality of what is around us at every moment in its most varied, muted and ethereal manifestations.

Delgado, as the gallery notes on their site, “is a visual artist originally from Mexico. After moving to London to study, Delgado emerged in 2011 as one of London’s most important street artists of the 21st century with a cult following. Delgado’s work is both populist and conceptual; he is known for his miniature paste-up scenes in which he rearranges existing imagery from mass media or popular culture into new compositions in a surreal and humorous way. Delgado’s early work consisted of tiny doorways pasted up around the walls of East London. He then started working with ‘the figures that came out of these doors,’ attempting to reflect the rich mix of cultures that makes London so cosmopolitan.” 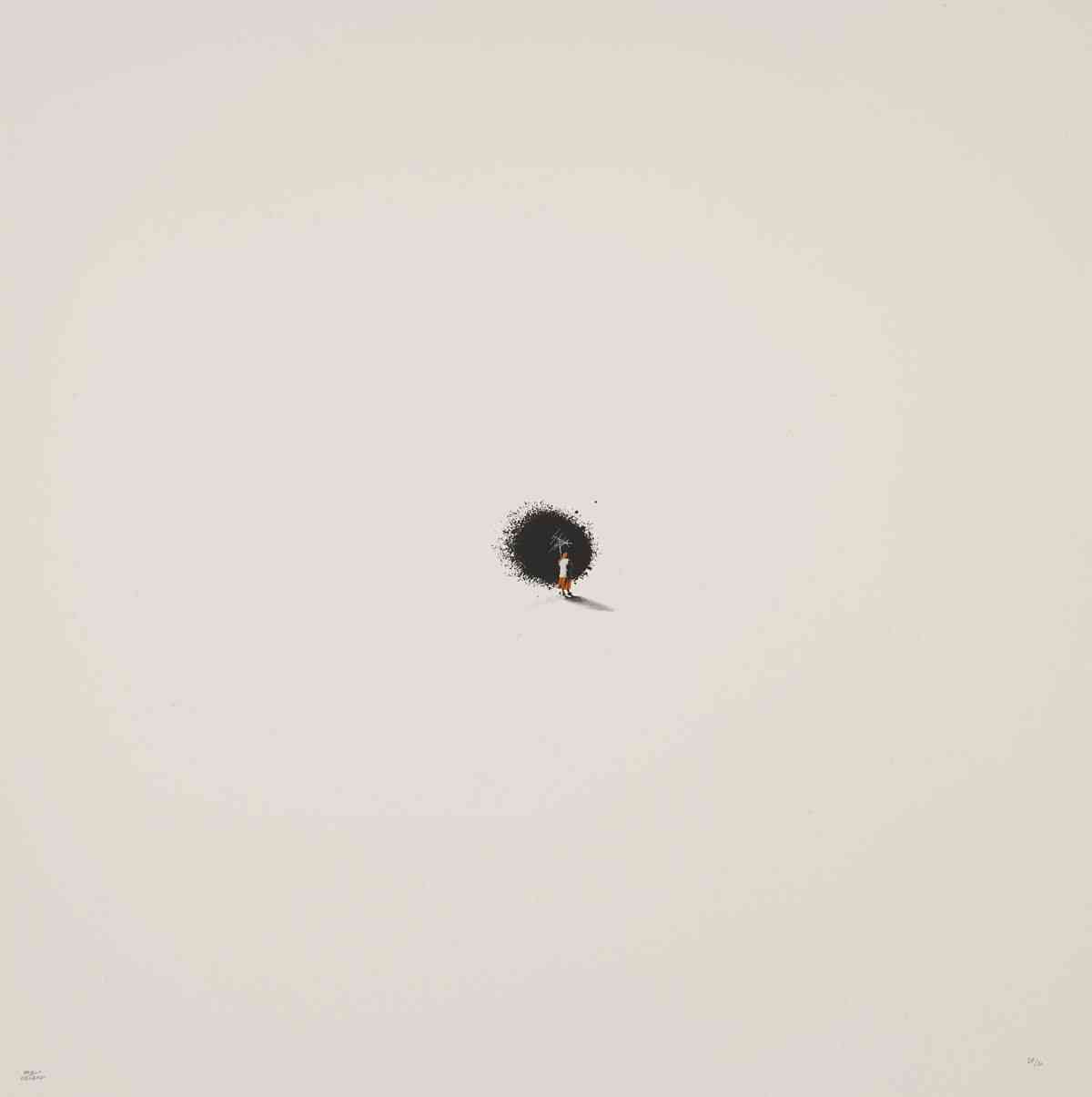 Delgado’s work in “On Their Level” is the art of shadow and prescience. He shows us what we see and then reveals in the most subdued ways what is hidden in the shadows and in the darkness. We not only see what is directly in front of us but also what is deeply within, hidden away inside us as we observe and perceive. Is it not true that what we see is nothing more than a reflection of our deepest desires and secrets refracted onto the perceptions of our observations? 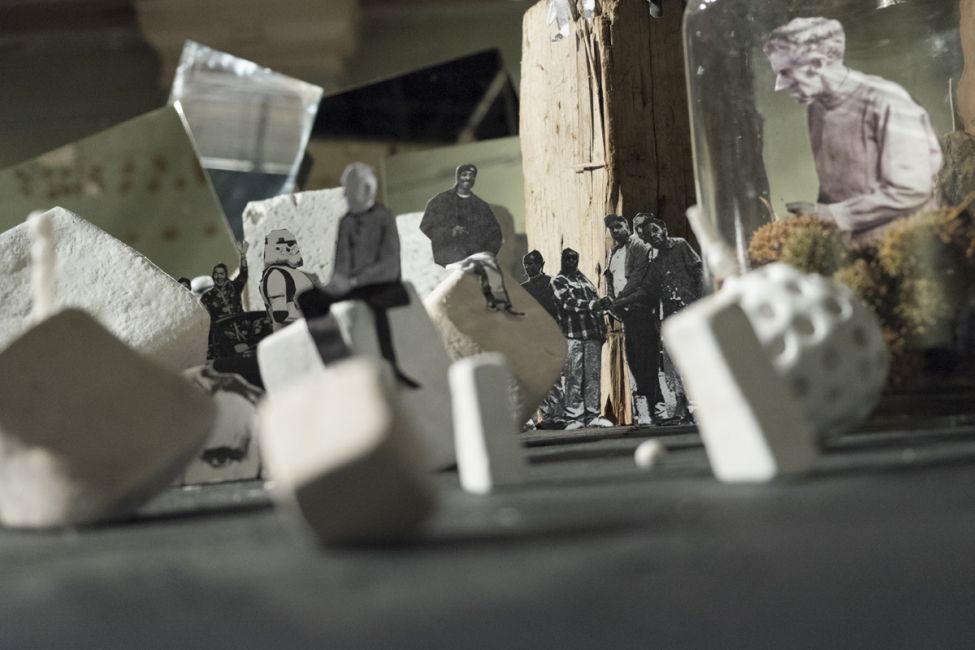 In the central installation in the show, Delgado has created viewing platforms. You place your head through the openings and see tableaux of figures from another time in imaginary communities that are dystopian in that sense that the surrealism of the view seems to be an environmental catastrophe just as much as it is an imaginative and somewhat playful symbol of both the world hurling toward the extermination brought on by global warming and a complex exhaustion of natural resources. It is as if the soul is recoiling from the hard and material facts of reality but cannot turn its eyes away from the holocaust of our habitat.

“On Their Level” is an exhibition that places the viewer inside the art and then turns that placement into a question of the deeper meaning of our existence. Delgado is an artist to watch as he has captured our moment in 2015 beautifully while at the same time allowing us to surrender to its dark allure with a both a wink and a giant question mark.