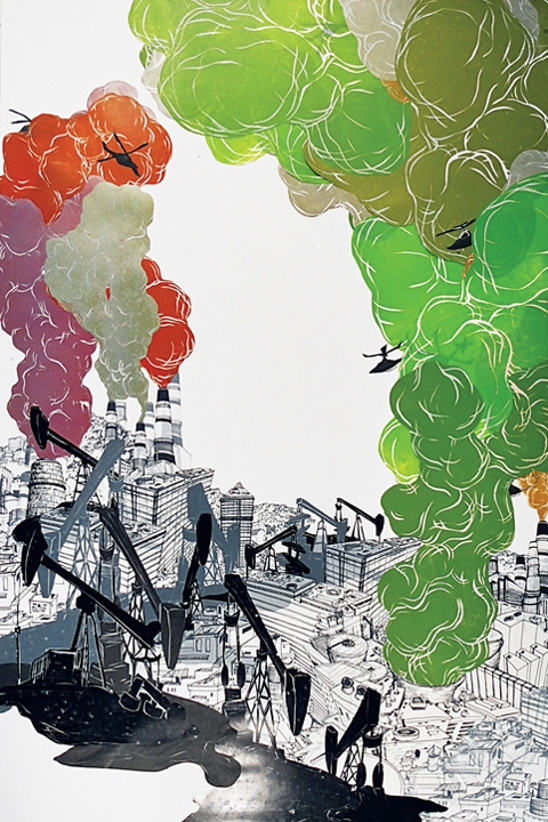 In the past hundred years or so, human activity has become the dominant geologic force on the planet. Large-scale enterprises such as dams, mining, urban development, and agriculture have done more to sculpt the surface of the earth than “natural” geomorphic processes such as erosion, plate tectonics, and glaciation. Earth scientists like Peter Haff at Duke University have argued that the earth has entered an “Anthropic” period, and that to understand the geologic forces at work in the contemporary age, earth scientists might learn something about economics, finance, land-use policy, and civil engineering, because these discourses actually have geologic implications. Enter here the work of Nicola López. 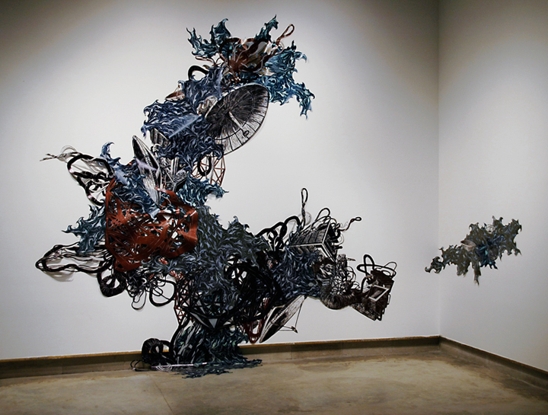 In drawings, prints, installations, and collages, López addresses the excesses of the Anthropic period. Abandoned urban environments appear in a state of decay, or perhaps left half-finished. Architectural forms lie atop one another as if forged together by the creative destruction of plate tectonics rather than the rational hand of an urban planner. In Excerpts from the Flood I, cylindrical buildings spew greenish-blue water in a swirl around a pile of empty urban architecture. In Monument II: Intaglio, the broken leftover of an elevated urban highway towers like a latter-day Colossus of Rhodes above the remains of an urban landscape. López’s collapsing built environments suggest the fact that someday, all of human history will be encapsulated in a few intriguing layers of rock strata—a Burgess Shale of human history unsentimentally fossilized in the earth’s recesses.

But this is not to say that López’s work is either dystopian or pessimistic. Instead, its tone is of cool resignation. In her series of “unnatural disasters,” the mangled skeletons of human infrastructures point out the oft-ignored dialectics of human production and the natural world. Indeed, as López shows, there can be no such thing as a “natural disaster,” because the concept of disaster is itself hopelessly anthropocentric. 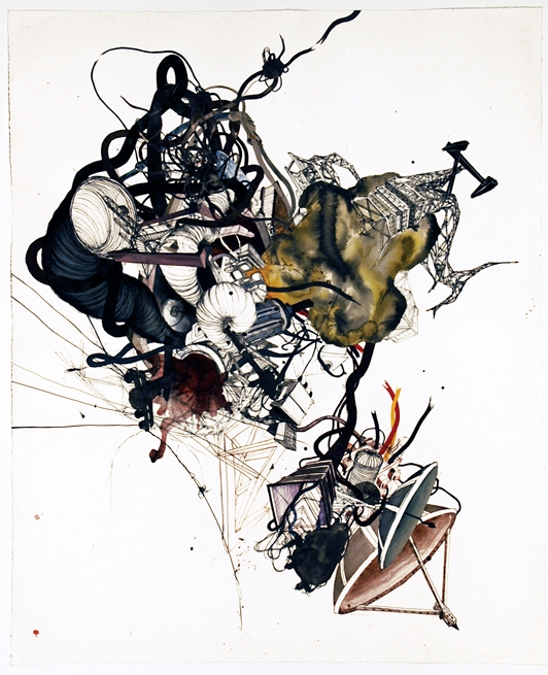 López’s images remind me of a comment made by Kurt Cuffey, a leading glaciologist and global-warming researcher based at UC Berkeley, during a series of interviews I conducted with him a couple of years ago. He said that from a geologic perspective, the history of the earth is ultimately indifferent to the mass extinctions, global warmings, ozone holes, and “natural disasters” of the human era. The notion of deep time, Cuffey told me, brought him a degree of solace even as his research showed humankind quickly creating the conditions of its own destruction. In López’s images, as curious as it might sound, I find a similar sense of solace.

—Trevor Paglen is an artist, writer, and experimental geographer working out of the Department of Geography at the University of California, Berkeley.