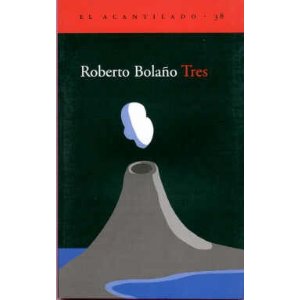 Most of Roberto Bolaño´s novels were written long before they were published: Antwerp was written in 1980, Monseiur Pain was written in 1983, The Skating Rink — to be released in English this fall — in 1986, and so on. Likewise, his poetry remained largely unpublished until Tres came out in 2000. In other words, many of the poems in this “new” book Tres, and its predecessor, The Romantic Dogs are thirty years old.

I read Tres shortly after it came out ten years ago, when I was visiting my friend Jesús, in a little town in the north of Spain called Gijón. His apartment had a view of the Cantabrian from the kitchen. He got a deal on it because it had no heating or hot water. I had used the same reasoning when I bought my plane tickets that February.

I actually had a copy of Bolaño’s The Return with me on that trip. My friends found its title — Putas asesinas in Spanish — amusing. By the time I had reached Gijón, five or six hours from Madrid by bus, I had finished it, so it was fresh in my mind. Jesús was one of the first people I knew then who had read Bolaño, albeit his poetry, mostly because poetry was all Jesús read. His shelves were lined with dozens of thin volumes of verse. At the time I didn’t read poetry, I mean, not if I didn´t have to, and so, as it is for most people, it was like hot air ballooning, or coral reef snorkeling: effeminate, riskless, whimsical.

It rained most of the time in Gijón, just above freezing. I was stuck inside anyway while Jesús worked in the neighboring city, Oviedo. (Jesús didn´t have a spare key, and the lock was so old it was impossible to get a copy of it.) So I had Jesus’s often depressing poetry collection with titles like, Refuge for an unknown beast, to keep me company. In that time I also gave Tres several tries. I read “Prose from Autumn in Gerona,” feeling like I was reading something in a language I didn’t speak.

At night Jesús would take me to this bar lit with colorful cowboy boot Christmas lights. Or we’d go to a hypermodern vegan eatery with his then girlfriend, younger than me, who would tell us about leftist struggles that Jesús would mock by telling her how he had used scholarship money given to him during Spain´s early brush with socialism to buy an electric guitar. At the time, I don´t think there was enough quiet in my life to even enjoy a book like Tres, never mind the dozen or so allusions that at the time would have been lost to me.

Then, a few months ago, I heard Monica de la Torre read from Laura Healy’s translation of Tres at the Poets House for New Directions 75th Anniversary. She was reading what a poem called, “A Stroll Through Literature” that begins: “1. I dreamt that Georges Perec was three years old and visiting my house. I was hugging him, kissing him, saying what a sweet boy he was.”

In this long list poem, or list poem of dreams, or dream list poem, Bolaño describes nocturnal encounters with famous, often dead authors and poets, with the sort of proximity one usually saves for family members. Tres sounded entirely new to me, and so I decided to re-read it, or I guess, read it, because if you can´t remember it have you really read it? But then when I started to, I remembered it, kind of like a conversation you’re not sure you really had, but then you dream about it and it seems real, until you wake up. It felt — for lack of a better word — metaphysical.

For the next month or so, I read his poems including The Romantic Dogs collection, included in the behemoth anthology volume called La Universidad Desconocida. More times than not, his novels came to mind. In reading them it was hard to forget about Bolaño the novelist. Even in the most lyrical lines there’s that taut narrative voice, half histrionic, half confessional heroin addict telling you his life story on the train.

But really Bolaño’s body of poetry, of which he considered Antwerp a part of, reminds one of what an amazing reader he was. He talks about saving up to buy Ted Berrigan’s Sonnets. He dedicates poems to Frank O’Hara. (Some people might think that reading the New York School of Poets is like reading, say, Pound, but in the Spanish-speaking world it is not. I once asked the contemporary Spanish poet Luis Garcia Montero — something like the Spanish version of confessional — his favorite poets in English, and he named T.S. Eliot.) His points of reference, his influences — of which one senses little anxiety, to get Bloomy for a second — come from all over the place, and his poetry shows it.

But maybe reading Bolaño isn’t about that either. Maybe it is really about his life. Like Oscar Wilde said, “I put all of my genius into life.” Like Andy Warhol said, “Death can really make you look like a star.” Or to quote Jorge Volpi in an article published last month, “Bolaño has only one predecessor: García Márquez.”

But back to Barcelona, back to Ted Berrigan, back to relative obscurity, and almost bohemia: El Golpe Chileño by Julien Poirier, a collection of chapbooks, and other pieces hitherto spread out across various publications, put together in one book. It contains all sorts of personal apocrypha: poems, comics, letters, notes to self, candid photos. I should say that when I read the title on line it did not have an enya, or ñ, so it didn´t strike me as strange. I thought it was some like a chilena, or a bicycle kick in English. I thought soccer, I thought rugby, I thought anything that wasn’t what this book is.

Poirier, as well as his poems, would fit in nicely with Bolaño’s backpacker click of romantic dogs. We truck from New York to California to New Orleans to Fez and back, with poems, shrooms and lovers. Register ranges from zigzagging free verse to casual prose. In between drawings and poems Poirier recalls: “Let’s replay that. We were drinking absinthe (I think it was fake) in a bar in Barcelona, then we walked to the cactus garden above the 4 a.m. harbor. Climbed through a hole in the chainlink fence.”

Reading El Golpe Chileño at moments like these, feels something akin to drinking a 40 ounce of beer at thirty, just to remember what it tasted like when you were sixteen. My favorite section was “My Distant Relations” in which poems are explained and contextualized in footnotes at the bottom of each page (a technique I’ve seen in a few Jack Spicer poems). One of the footnotes towards the end of the sequence Poirier even explains how Ugly Duckling Press, that published this book, started.

With the presentation of so many, flawless books — which by and large feel impersonal — it’s nice to recognize that sometimes we’re all human, by which I mean… I’m not sure.