The Legacy of Steve Jobs

Posted on October 7, 2011 by adminbena
Max Benavidez on the Death of Steve Jobs 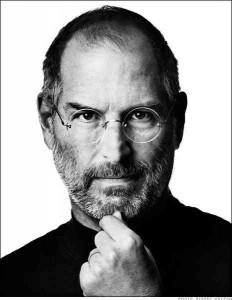 I first learned that Steve Jobs had died on my iPhone. A friend texted me soon after the news broke, “I can’t believe that Steve Jobs died!” I was in New York for a digital summit, which was appropriate. I actually read the text while having dinner with some friends. I shared the news all around and everyone was taken aback. Even the bus boy knew who he was. He pulled out his iPhone and said, “Unbelievable.” A star in our digital galaxy has gone dark.

As a Californian and a techie, I was shocked. I knew he was dying. He was ill and I expected this any day but when it actually happened I knew it was the end of era. No wonder the launch of the iPhone 4s was so tepid. He had been out of the commission.

More than anything else, he was an icon of the digital age. A giant of Silicon Valley. Whenever I go on to Facebook or do a Google search, I do it on my iPhone and somehow Jobs is there. He was a visionary. A true leader. When historians look back they will see Jobs as one of humanity’s great lights and a person who defined our time.

His influence was huge. He was not only a genius and the holder of over 300 patents, some of which are called iconic patents, he was a classic example of the American Dream. If you have a great idea, the drive to see it to fruition and, then, the inner compass to sense what people want, you can make it. You can be very successful­. The interestin­g thing is that he also experience­d failure and in some ways even that drove him. In fact, some of his most groundbrea­king products were designed, produced and marketed after he found out he had pancreatic cancer. Even with that deadly diagnosis, he kept moving, he kept creating.

We can remember what a great CEO he was and how he produced quarter after quarter of profits for his company. But there’s something more here, and that’s the ethos he embodied: creativity, innovation, bold brilliance, a sharp-eyed consumer-orientation and, above all, the sheer elegance he embedded in his products.

I was always a Mac person. Since the early ’90s, I always preferred the Mac option. It was my preferred method of accessing the web, using email and working, writing, searching. I remember using the first Macintosh in the ’80s. It’s easy to use. That’s it. Utter simplicity.

Steve Jobs embodied that for me. As we entered the 21st century, Mac and Apple were it. Like so many others, I looked forward to Jobs introducing new products. The desktops, then the laptops, and, of course the iPhone. The iPod. The iPad. All of the Apple product line. It made my life so much more than it may have been without all these practical tools and products.

It’s been a transformative, sexy and cool experience — the touchscreen technology, iTunes, the user-friendly design, everything that helps characterize our times. Thank you, Steve! RIP.

One Response to The Legacy of Steve Jobs