A Conversation with Artist Karen Green on Her New Show—“Tiny Stampede” & Memory, Grief, and Faith 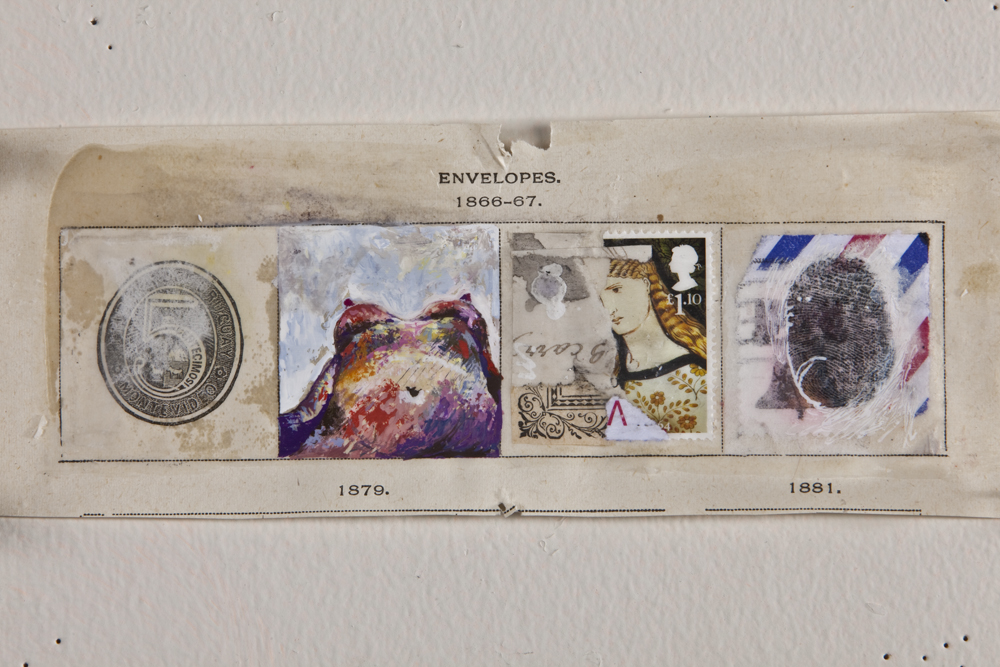 The machine was inspired by the mixed emotions Green felt at her late husband, the author David Foster Wallace, who had committed suicide in 2008. The machine helped her return to her art making and channel her grief. It looked like a giant colorful children’s toy and was a central work in her first show, “Latent Learning Experiments,” for SPACE Gallery in South Pasadena, California.

Since then she has continued her creative journey as a way to make herself whole again as an artist in the aftermath of a searing personal tragedy. As she told The Guardian earlier this year on the occasion of the publication of Wallace’s unfinished novel, The Pale King, “I think I’m supposed to buck up and be the professional widow,” she says, with another quick laugh, “and I have found that very hard. Very hard. I mean one day you are a couple living in a little house and watching The Wire box-set for the third time, and letting the dogs do their antic stuff, and then suddenly you are supposed to be functioning as the great writer’s widow. That wasn’t how we lived when David was alive. I felt about him like I would if I had been married to a sweet schoolteacher. So I ignored everything for a long time. Until now, really.” 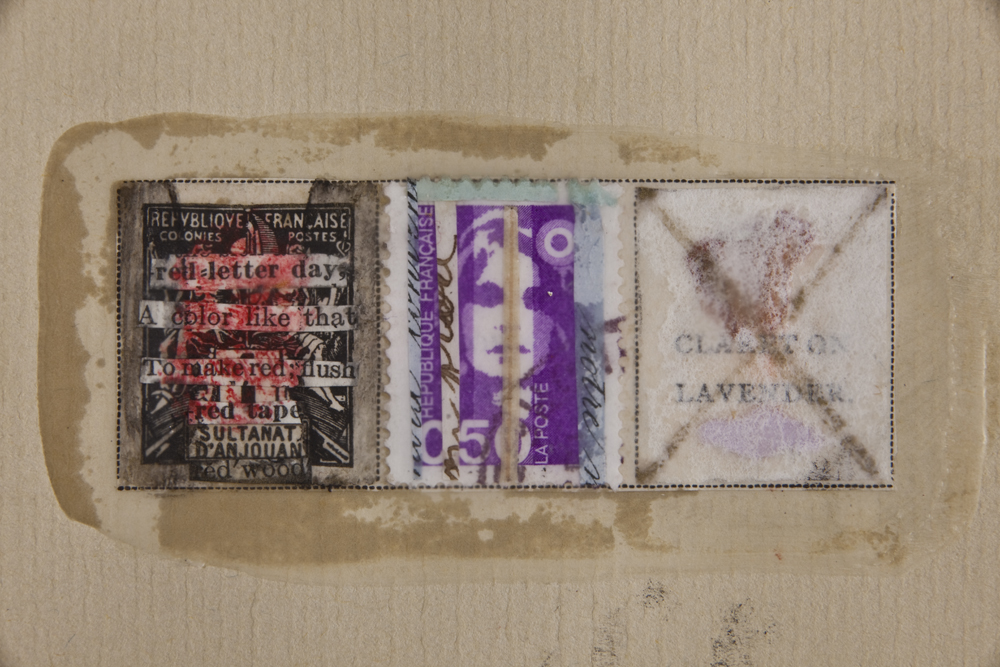 Green’s latest show, “Tiny Stampede,” opens September 24th at SPACE, and presents a view into widowhood that is both cleansing and illuminating without ignoring the finality of death. For her third solo show at the gallery, Green created nearly 60 mixed media miniature works that take the idea of the stamp collector’s album as well as the idea of something being stamped in one’s memory as a starting point to explore perennial questions such as identity, love, death, sorrow, and faith. Each miniature becomes a meditation, a journey into a world with its own language of color, texture, and emotion. There’s a tactile dream-like quality to the works mixed with a delicate subtext of nightmare and horror. These are images to be studied, held in one’s hand even, and then put back into their place in the “stamp collection.” 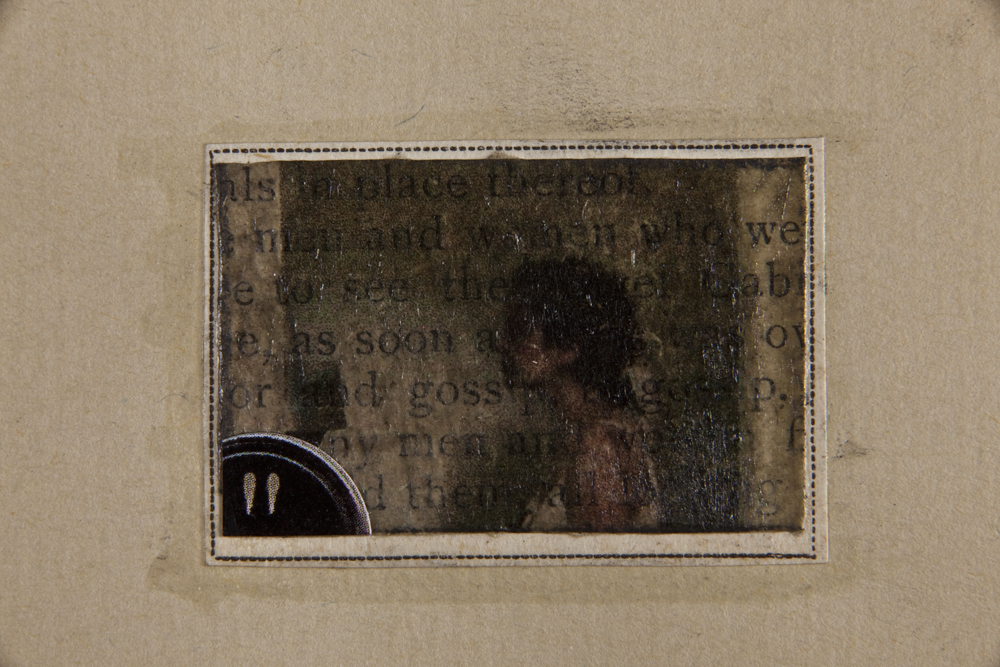 Although there’s a serious edge to the show, Green’s humor comes through as it did with the forgiveness machine. The works are so tiny and dense with imagery and intimation that we peer into them, literally squinting in search of meaning. That recalls a scene from the film, Synecdoche, where the only way that viewers can see miniaturized oils (painted by Alex Kanevsky) is by wearing magnifying spectacles that make them look like mad characters in a Lewis Carroll story.

[Note: Our conversation took place via a series of email messages.]

Max Benavidez: I see some recurring themes in the work: black birds, the words BLUE and ORANGE, the image of George Washington, silhouetted black images, the words for the color GREEN (your name) and VERMILION, CARMINE.

What is the relationship between colors and grief? Does each color stand for a feeling or a state of grief and mourning? 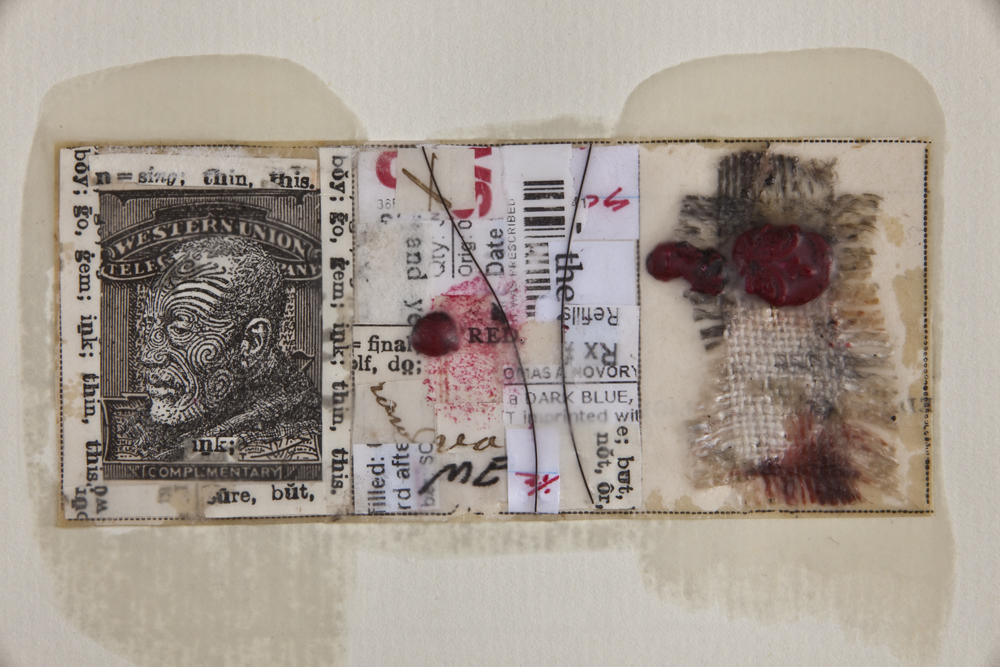 Karen Green: I keep tap dancing around your questions, trying to find a benign one, one that won’t lead me into self-description. Like being in a church and circumventing the confession box! Which is partly self-preservation, but also part of what I like to believe about art making—once it leaves my inky hands, it’s open to interpretation. What I was thinking about when I was making it is now what you are thinking about when you look at it, but they could be entirely different things. 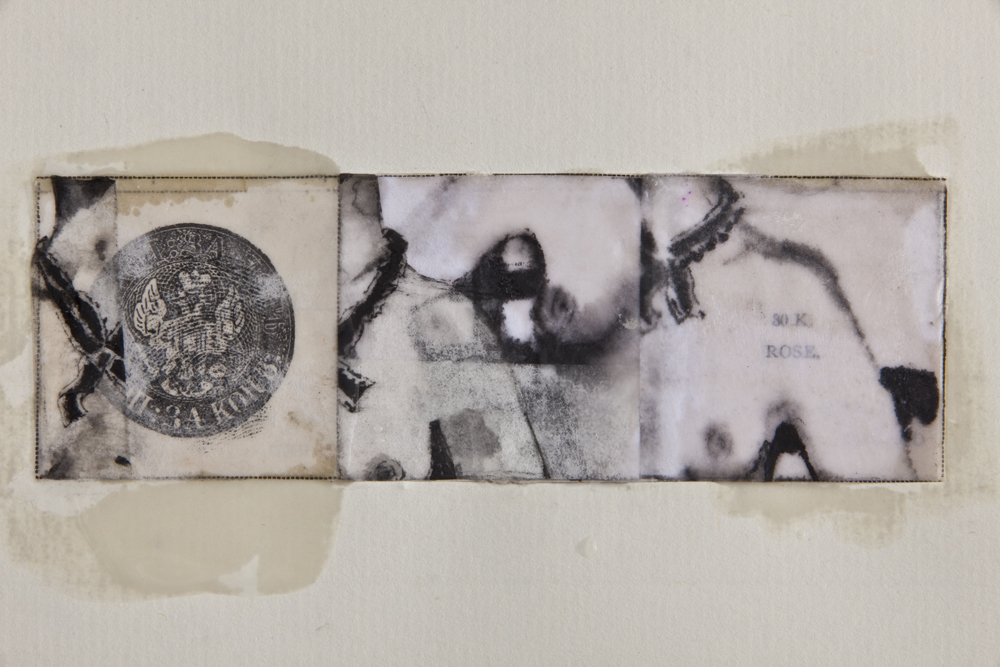 Colors. I grew up in a very colorful part of the world. I went to kindergarten in the Haight Ashbury district of San Francisco, land of tie-dye, the red bridge over that blue bay. Very saturated color. Hippieland, rose-colored glasses, drug-induced political optimism, free love. The concept of “free love” is still funny to me. Drugs scared me; as a kid I felt like I was already “seeing things.”

Anyhow, before I lost my husband, I started making lists of what I called “unimaginables” and I organized them by color. In hindsight, it was a way of organizing fear and hoarding faith. It was not a preparation for his death; quite the opposite. Death is very black and white: After he died I felt like I couldn’t see anymore, I couldn’t find beauty, I couldn’t see in color.

It’s the transitional, universal language of grief from a visual person’s perspective, but at the time I was no longer a “visual person.” I lost the innate ability (a crow’s, a magpie’s) to find the sparkly thing in the garbage pile and it panicked me. Whatever it was that soothed no longer soothed, probably akin to losing one’s religion, losing faith. 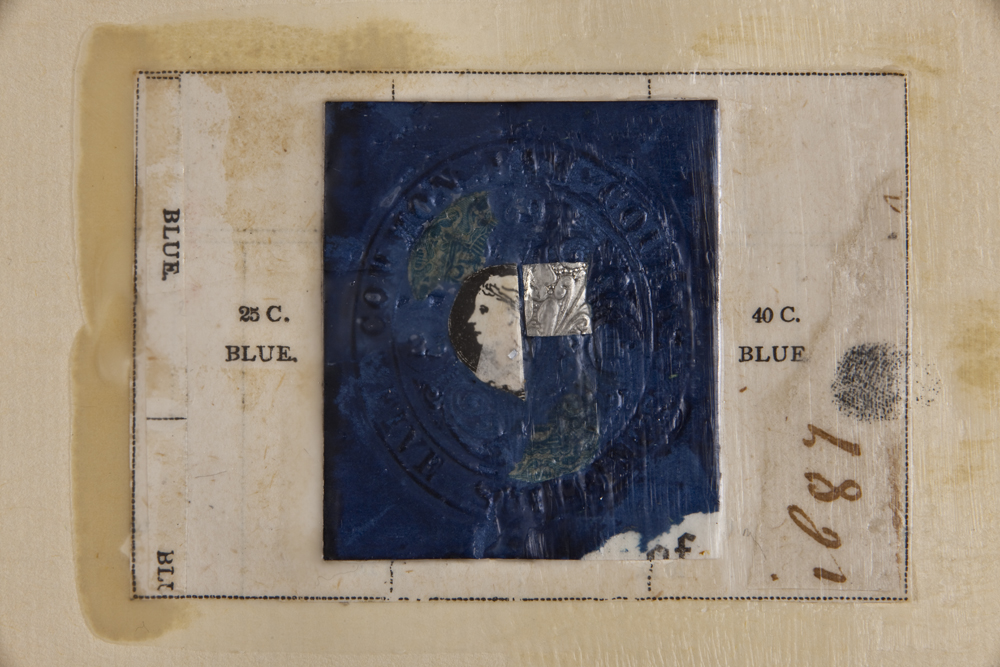 Leading up to the miniature making, I was also reading about left/right brain functions, how memories form, something called “split brain research’–and was doing these left/right-handed drawing simultaneously in an effort to, I don’t know, make my artistic self whole again (?!)–And found some of the experiments related to color inspirational.

All of the pieces are done on pages from a postage stamp collecting book from the 1800s, and they are color coded so collectors know where to put the stamp. I love that they are so specific about the colors—vermillion and carmine, blue and red. The color prompt was built into the pages and guided me. Guidance is Good. 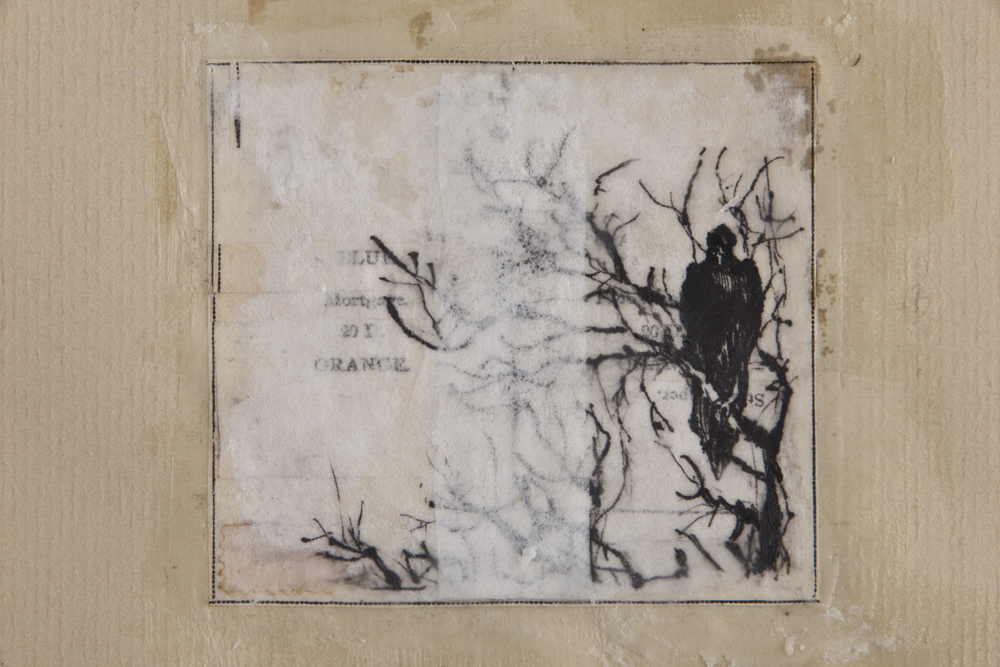 The black birds have been showing up in my work for a few years. Sometimes they’re crows, sometimes Wallace Stevens’ Thirteen Ways of Looking at a Blackbird, sometimes imagined, endangered species. The bird in image 043 happens to be a turkey vulture. Poor, ugly creatures; the chambermaids of road kill. When I first moved back up here I would drive out to the ocean and take photographs from the moving car. I think I was trying for a cow, but the vulture showed up. I also have a bat fascination going after seeing 750,000 of them fly out from under a bridge in Texas.

MB: Talk about the idea of stamp collecting and the work in the show. I’m especially struck by your idea of using the fingerprints of widows.

The point is: One thing led to another. Imprint led to fingerprint. Identity has roots in the word, “sameness”—absolute or essential sameness: oneness. Which led me to thinking about Absolute Identity vs. Accidental Identity, and the word “widow” and widowhood as a kind of club nobody chooses to join—and my own arrogance in thinking I am/was special in my resistance to the word or its imposed meaning. 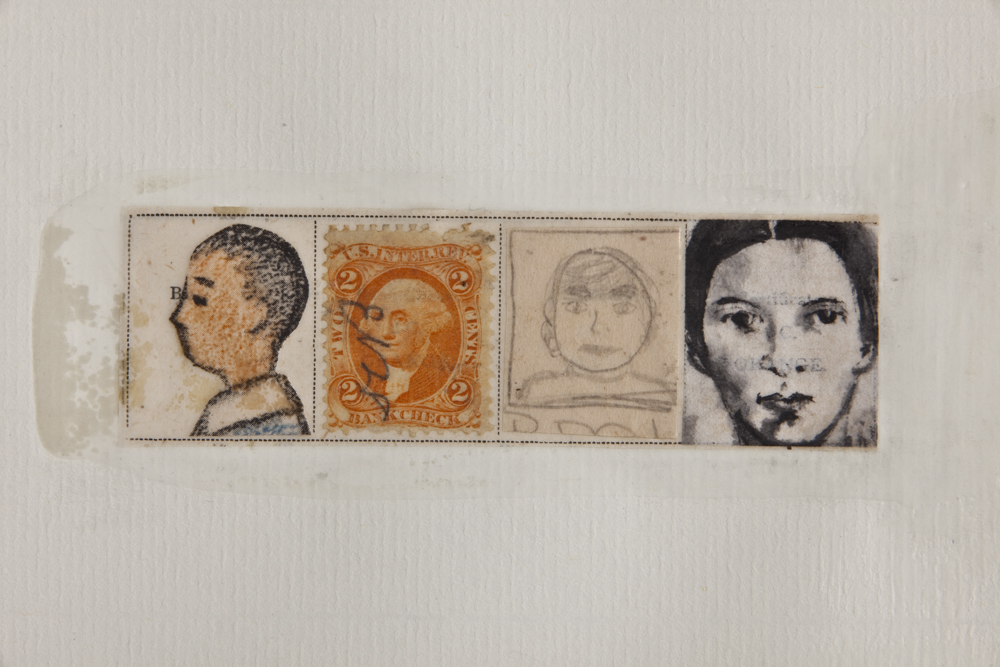 MB: Something that really struck me is your use and choice of language, of memorable snippets. Some that stand out: “Bring me a song like Forgetting.” God said, “I made a man abruptly leave.” In another image, you place these words on the card: “I dreamed I found the phrase to every thought.” And later in image 059 1: “I felt a funeral in my red heart.” It seems like you’re trying, as Shakespeare said, “to give sorrow words” alongside the image. Is that true? 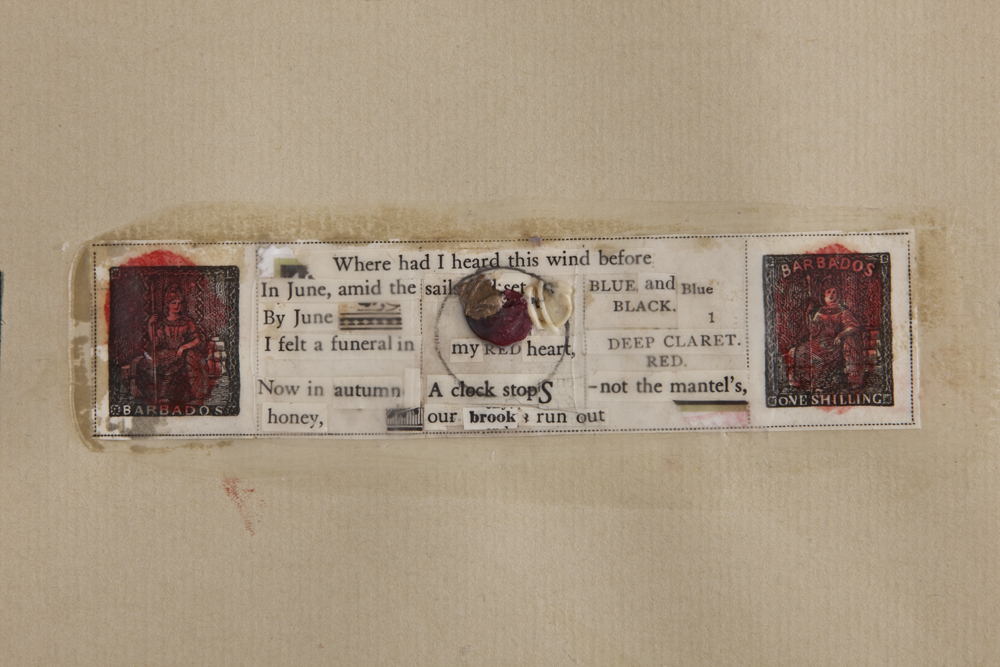 KG: I like the snippets you picked out. I’ve been making this “found poetry” for years. I thought I invented it, but found out later I most definitely did not. Some of these are taken from a poetry anthology–I cut out just the first lines and spent an afternoon or two rearranging them. Then I got into a trance and cut those up and rearranged those. Trances are hard to come by these days; I am happy for those hours. And yes, “to give sorrow words”, sneakily, using the words of others who tried to do the same. Oneness again, a collaborative effort with those dear unsuspecting poets. There is something subversive about it, which appeals to me.

MB: There’s also a forensic quality here, too. In 010 1 there is ORANGE and BLUE over a door that looks like a door to a morgue. At another point there is the word investigation. And later the phrase, “My embalming sky.” “Autopsy performed.” Where do these come from? 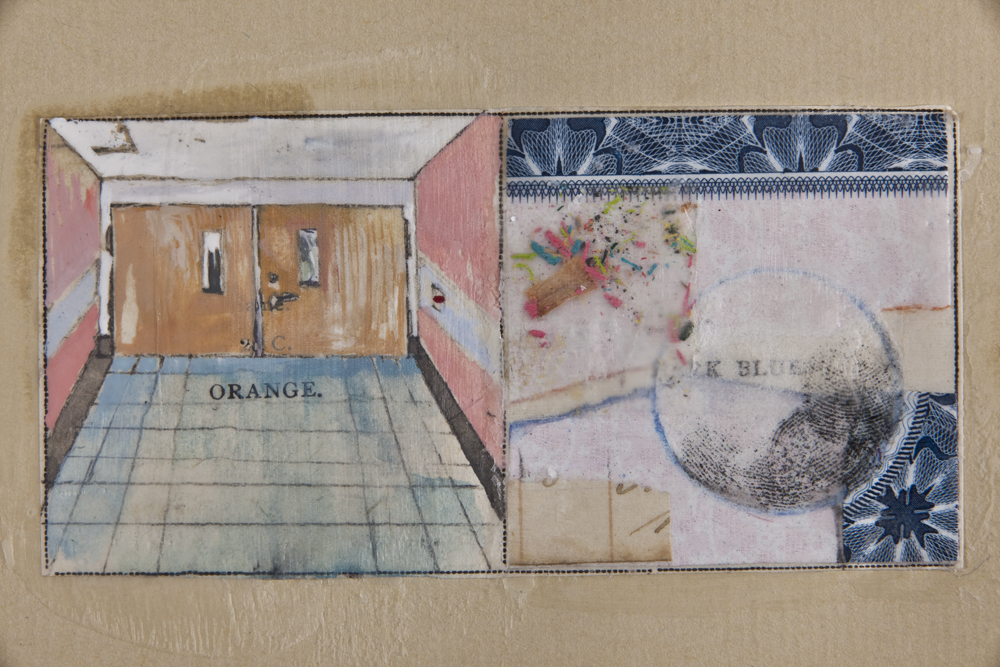 KG: I’ve spent a lot of time in hospitals in recent years. Sometimes I was the patient, and I took pictures. (Even the waiting rooms are terrifying; don’t get me started on the art choices.) It’s hard for me to admit that they are places where people get well, but sometimes they are.

MB: You are a widow. And image 046 seems like a mourning card, an artful version of the cards that are passed out at funerals. When you say in image 052, “At last the gradual light,” are your seeing the light after your own grief? Is there any resolution to loss? 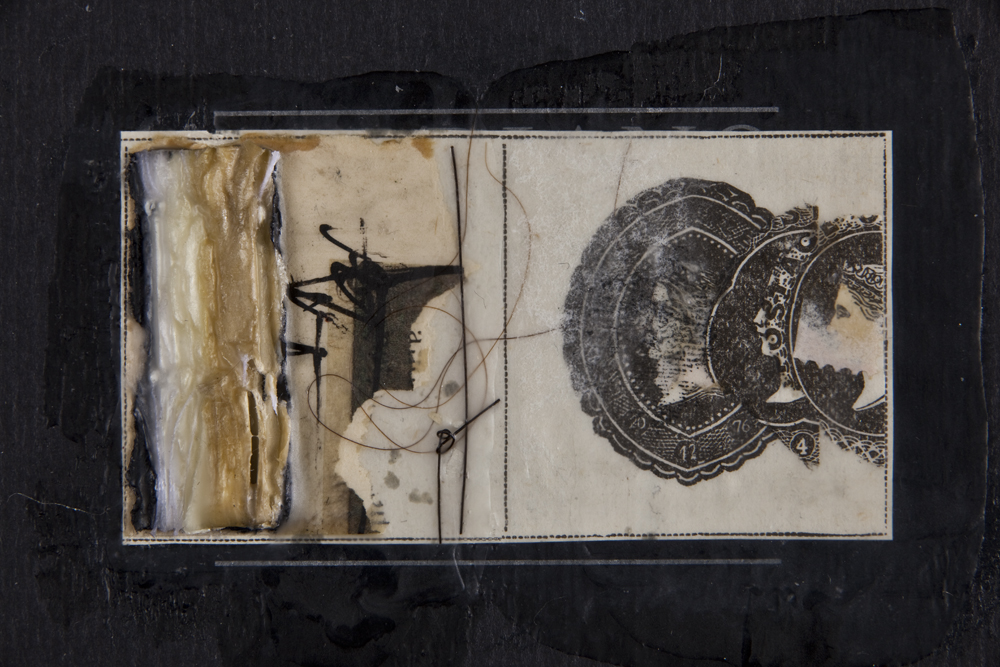 KG: God I hope I am “seeing the light after my own grief”. Let’s pretend I am.

MB: 022 – “the shape of this night.” Do you mean night as in the long night of grief and do you intend your work to shape or define or make sense out of the grief, to be the pronunciation of grief in a way?

KG: Nights sort of reverse-illuminate what’s ailing a person, generally speaking. Monsters come out from under the bed, etc. Grief comes in a variety of peculiar shapes; I guess I’m trying to “make sense” of them. Sometimes grief makes a very pure, helpful, luxurious shape—the shape of the person who is gone, the exact and individual shape of that person. It’s good to remember those dear contours/shapes. In my own experience, night contaminates the “pure” kind of grief. Does that make sense?

MB: Why is George Washington in so may of the pieces? What does he represent? 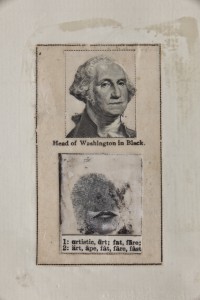 MB: Finally, there is a line from the Bible that says “a crown of beauty for ashes.” That seems to resonate here in your work. Do you think or feel that beauty heals grief? Is it the antidote to the darkness? 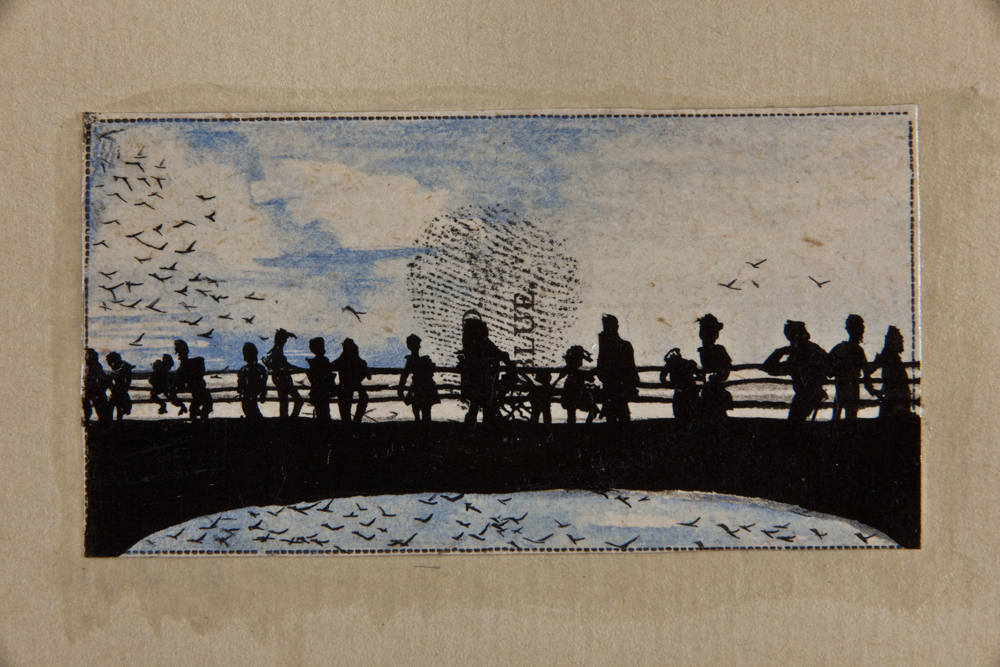 One Response to A Conversation with Artist Karen Green on Her New Show—“Tiny Stampede” & Memory, Grief, and Faith