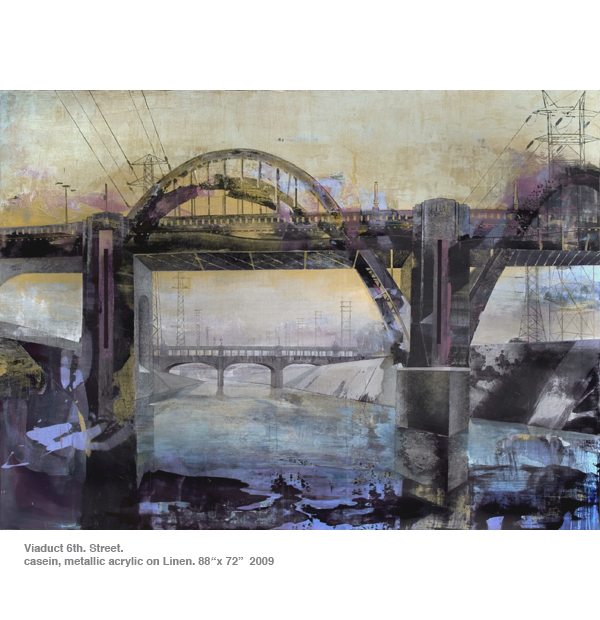 David Eddington grew up in England where he attended art school and now lives and works in Venice, California. His work has been exhibited internationally. For Eddington, art is in the experience. He recalls one moment that helped define his vision. It happened while he was in Umbria, Italy, several years ago: “After exchanged pleasantries, taking the custodian’s key, crossing an adjacent field, unlocking the small Umbrian chapel and having the Madonna del Parto totally to myself. Seen in the pale blue light, it was more the perfectness of this early Piero della Francesca fresco, than its theological symbolism, the juxtaposition of the reds and greens, its aesthetic symmetry, that gave me an overwhelming sense of completeness.” 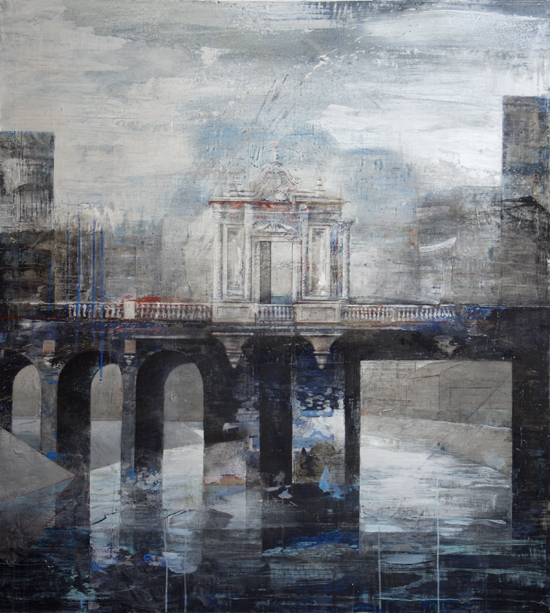 Arches from the L..A. River series

His own haunting work captures the strange baroque mood of Los Angeles. In “Administration Building,” Eddington brings the isolation, the silent brooding power and utter futility of our bureaucratic age into clear bleak focus. His works about the L.A. River are stunning testaments of civic decadence. As he says, “In these bridges, alongside industrial engineering and steel spans, there are glimpses of Versailles and ancient Rome – an illusion, enhanced by the destitute. It is easy to imagine oneself partaking in the middle-distance adventures of a Piranesi etching. I love LA moments like these.” With these works we are in the presence of steel, concrete, and arc in their bent and faded grandeur. 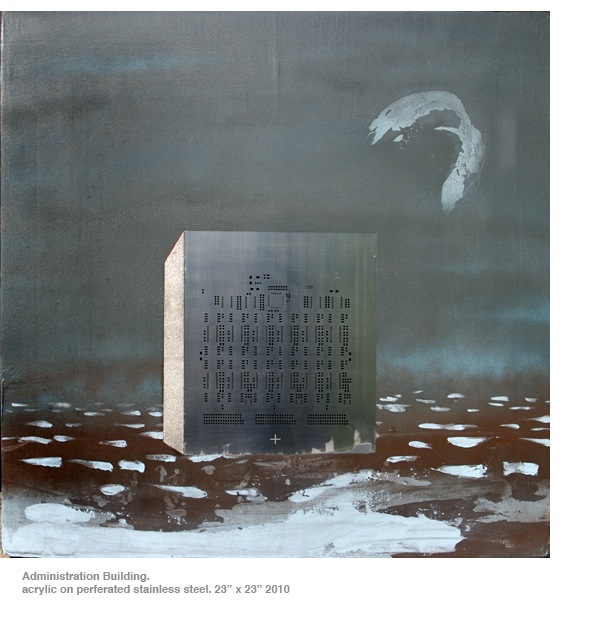 1) Why are you an artist?
The reason why I was almost not an artist was because I was that student who could draw anything; my guilt foolishly persuaded me to move sideways – priesthood was considered. From as early as I can remember being able to express myself with a crayon captivated me; I loved watching the marks arrive while moving my hand over the surface: yes, obsessive, and I still am. Fumbling attempts to recreate historical works that I loved, but couldn’t possess, even then I recall I was more interested in atmosphere, the mood the paintings projected, than the subject matter.

2) What are your influences?
The Central School, the London art college I attended, was a short walk from the National Gallery. Many lunch times found me in front of Veronesse, Titian, Giotto; still I play with those experiences. Now tempered by an ongoing contemporary dialogue, first Malevich, Philip Guston, then with significant artists and writers such as Keifer, Baselitz, Richter, and Proust, Leibniz, Thoreau. Closer to home, I also observe the painters Vito Acconi, Ida Applebroog, Mino Argento, Susan Rothenberg, and Karl Weschka. I follow artists who, like me, are more process-led; work which needs time, layered imagery that has play too. 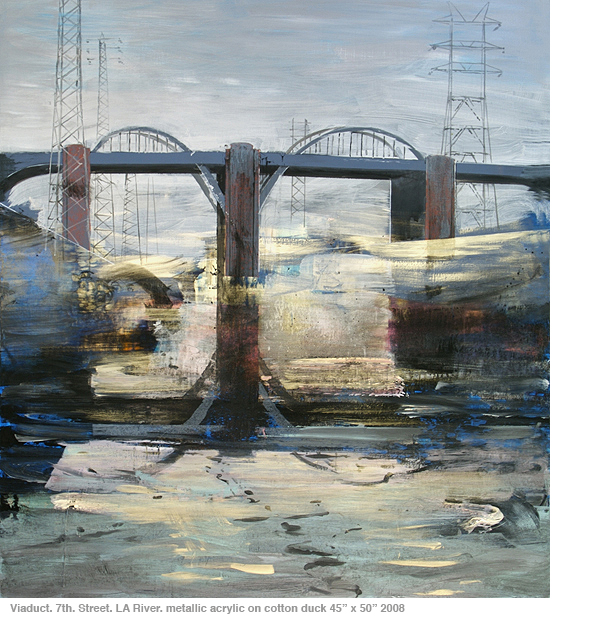 3) What are you working on now?
My heroes at first pursue obscure lines of research, as my work is a way of discovering what I am really thinking. My search begins as near to my back door as possible. The series DWP (deposition of water and power) is ongoing; there is an overt political element in this series as in the concurrent Concrete Basilica. My blood is low in Vitamin D, but it flows fiercely when I mingle with the disenfranchised who have made their homes under the LA River bridges. Uncomfortable, or perhaps because of that, I spend considerable time on the concrete bed of the river. I feel at home there.

You can see more of Eddington’s work here.