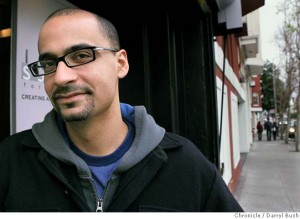 The strong interest in Diaz could be a reflection of the scarcity of extraordinary U.S. Latino writers. But, there is also a cultural and literary innovation of Oscar Wao that just about antiquates the early 90s Latino Literature boom authors; Cristina Garcia, Sandra Cisneros, Oscar Hijuelos, etc. The Brief Wondrous Life of Oscar Wao is about an overweight Dominican nerd trying to lose his virginity. That premise allows Diaz to weave a story that swerves along an open range of cultures that connects the Dominican Republic’s history, a multigenerational family story, and a complex cast of characters influenced by MTV, New Jersey, science fiction, and Hip Hop. Latino Lit Boom authors have also spoken about back and forth among countries, but Diaz presents this broad range of cultural signposts, attributions to disparate historical references, and street-wise aesthetics in a “cut n’ paste” and de-romanticized abandon that makes Oscar Wao appealing, exemplifying the AmericanPupusa aesthetic where one can be of and down with the culture, but not bound by it. The book’s appeal was made clear when a female student in the audience said “somehow” she relates to him more than Julia Alvarez.

Junot wears glasses, is bald, and sports a goatee. The timbre of his voice and his face make him seem pretty young (based on responses during the Q&A, I infer he is in his 40s). His demeanor and voice is also low-key, with a monotone cadence 100 decibels below a shout. Yet the New Jersey accent is there. And, using words like “motherfucker” and “shit” in an academic setting shows some street is there too. As you listen, you can easily see how close Oscar Wao reflects his personality, and a postmodern kind of Latinidad (oxymoron maybe). Throughout the evening, the author name drops British authors of the literary canon, throws down five “F bombs” when explaining how hard it is to write, and talks about how his work relates to race and culture in one breath. His cultural place becomes almost allusive, yet we can see his Latiniad and cultural affiliations. He does not code-switch language, but cultures. He does not represent one hood, but a bunch of places. And, he does not come from one social space, but resides in many.

Presenting such a multiplicity of social constructs can even silence a room. Junot began with a reading from chapter two, where Oscar’s sister Lola talks about the life changing moment when her mother Belicia asks Lola to feel a lump in her breast. It is a powerful as we see strong development between two female characters, and shows a jarringly intimate scene in a narrative of constant movement. After he read, I imagined a few questions would arise from the audience about the role of women in his work, an anecdote about troubled mother and daughter relationships perhaps, or a question about his reading choice for the symposium. I personally found it interesting that a male writer chose this piece to set the tone of the event billed to feature “dangerous” writing on the immigrant experience. The choice also brought up a question of positionality, where a male writes through a female character. Unfortunately, none of these issues were raised for the entire evening. The reading was left hanging as conversations moved towards New Jersey, using the ‘N word’, and comic books.

What did come up was Diaz’s choice of non-traditional cultural references such as science fiction, role playing games, and New Jersey as the vehicles to unleash the narrative. Diaz explained it as dealing with an absence of history and reconstructing memory. He also cited Foucault’s idea of “truth effect,” where truth is not an idealistic absolute but the process in which to create statements. These assumptions allow him to “unlock” culture in different ways, freeing him from old white American archetypes, and the need for “approval,” which he says differs him from the early 90s Latino literature boom. This absence of history applies to the D.R. side as well, where the erasing, reinterpreting, and propagation of Dominican, and larger Latino history, makes any reliance on it meaningless. In other words, the history of the U.S. and D.R. are both fictional, so the need to use them as handrails for writers to transmit truth to the audience is just another act of subjection. Diaz cites Art Spiegelman’s “Maus” to show how to embrace the subjective mode of the comic book to reveal a truth more powerful than a history book, “realism doesn’t unlock” explains Diaz, “comics unlock Trujillo.”

Later, Diaz shared two historical precedents related to nationalism that explained his ability to move the narrative of Oscar Wao back and forth between nations, times, and people. Diaz first cited how Jose Marti, a white Cuban, used nationalism to connect causes, races, and nations of varying interests and backgrounds to promote solidarity and Cuban independence. Diaz called Marti’s approach “Nationalism as a door opener, not a door closer” in opposition to today’s use to dehumanize foreign individuals and create an antagonistic “other.” He also shared how his own immigrant identity was interestingly affirmed when learning that the Cherry Blossoms of Washington D.C. were used to replenish lost groves in Japan after World War II, noting a sense of losing one’s origin, but an ability to return and enrich it with foreign influences intertwined. These examples illustrates a unique juxtaposition; Jose Marti’s nationalism was formulated by his travels and transgressions across social and cultural nation-states, and a hybrid Cherry Blossom from the U.S. was used to reinvigorate the national iconography of its place of origin.

RACE AND THE “N” WORD IN A POSTMODERN KINDA WAY

Diaz also applied race in a cut n’ paste postmodern. A student asked what he thought of the recent coverage surrounding the removal of the ‘N word’ from an upcoming edition of Mark Twain’s Huckleberry Finn. Diaz responded that, as an artist, his use of the ‘N word’ is determined when the work calls for it. Plus his use “does not mean a political stance or support of the word.” He then criticized that U.S. society can find it easy to remove the words of arts and literature, but no one would dare change the language of a corporation’s mission statement or official literature. In this instant, he finds politic in the artistic implications of the ‘N word’, but distances himself from a direct sociopolitical relationship when used in the context of racism. This allusiveness removes his obligation to connect and deal with the matter as a Dominican. And placing issues of race in the artist setting seems to give him the ability to shift, change, and rearrange these racial social constructs to meet a narrative’s ends. Feels almost like a freedom many of us seek in our own dealings with identity.

PROCESSING THIS OUT FOR MYSELF AND THE AMERICANPUPUSA VIBE

Junot Diaz’s talk brought me to think about my own journey and place in space. I recall being the Army brat middle-class child, turned latch-key kid living with a single mother and no money; the culture shifts between El Salvador, Guatemala, and United States in my house and school; and my choice of studying the African Diaspora, and immersion as a Hip Hop head, to unlock my own sense of Latindad and Albinism. I never felt my wide-range of cultures was ever reflected in U.S. Latino literature until The Brief Wondrous Life of Oscar Wao. I find it difficult to say how these examples should be applied to the AmericanPupusa aesthetic. But the tricks Junot Diaz shared brought a sense of peace in my identity, and opened my eyes to new ways of interpreting my surroundings and cultural movements, and express myself in ways where I am both aware and oblivious to social constructs. Junot Diaz showed that these constructs we often hold so dear, to the point it becomes part of our DNA, are not to define us, but serve as markers to create on our own terms.