Posted on May 4, 2011 by adminbena
Commentary by Max Benavidez for The American Show 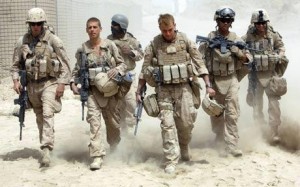 The death of Osama bin Laden is a symbolic turning point in what’s been called the “war on terror.” After the horrific events of 9/11, Americans wanted to bring the chief perpetrator to justice. That’s been done. It was also the main reason that we invaded Afghanistan.

If anything the bold and successful operation that took Bin Laden’s life shows us the type of approach that we need to take in the battle against terrorism.: strategic, laser-focused special ops not massive operations with 100,000 soldiers on the ground who are smack in harm’s way.

This week Florida Rep. Cliff Stearns (R) said that Bin Laden’s death should be the beginning of the end of the ten-year Afghanistan campaign, the longest war in American history. As the Florida Times-Union reported, Stearns said, “Most people I talk to say that we need to address our nation’s budget deficit, and we are spending a lot of money in Afghanistan,” he said. “Now that bin Laden has been executed we must go home.”

I agree. We need to declare victory and bring our troops home.

The Pentagon says we spend over $300 million a day on that war. That’s more than $100 billion per year. This is in a poor country that has an annual GDP of $16 billion. There’s a serious imbalance here. The definition of crazy is doing the same thing over and over again. It’s simply crazy for the U.S. to stay in Afghanistan.

According to a recent CNN/Opinion Research poll, 63% of Americans are opposed to the war. It’s draining our treasury and even worse we have had 12,000 American troops killed or injured while on duty there.

If something as critical to the American people as Medicare can be on the table so should the Afghanistan war.

This is the debate that we need to have now as we look hard at our budget priorities. Earlier this year Republican Sen. Richard Lugar, who chaired the Senate Committee on Foreign Relations for years, told The Huffington Post, “This is a debate we’re going to have in the next five months or so.”

As far as our foreign policy is concerned, we have other pressing issues before us. Obviously, Pakistan needs our attention. We’re already involved in the hot mess in Libya and we’ll need to provide a steady hand to help the transition to democracy in Egypt, Tunisia and perhaps even Syria.

The time has come. We need to leave Afghanistan and concentrate on the big problems and challenges here at home.

We can no longer afford our involvement in Afghanistan in terms of blood and treasury and, let’s face it, we’re not going to make a huge difference by staying. We need a rapid draw down of U.S. forces.

Osama bin Laden is dead and we need to move on sooner rather than later. It’s as simple as that.