A Progressive Racial and Political Message in “Fast Five”? 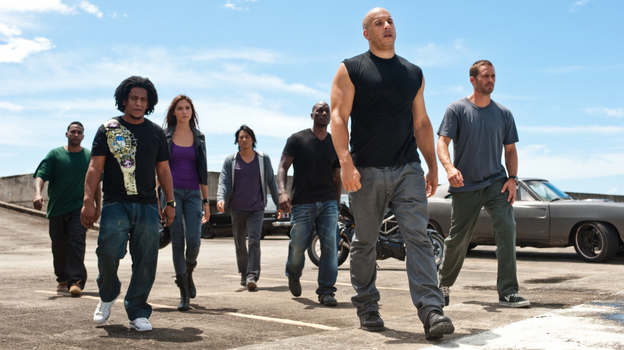 Wesley Morris, film critic for the Boston Globe has an interesting view about the newest film in the Fast and Furious franchise, “Fast Five.” He tells NPR in a story headlined “Fast Five”: A Progressive Force?” that “Basically it promotes race as this very normal thing. Around these cars are these very different types of people, but it’s not the subject of the movie like it is in most Hollywood movies. Race is just a matter of fact.” Race, Morris says, “has just sort of exploded into such a thing in these movies that it almost doesn’t even matter.” Morris guesses that Vin Diesel, the movie’s multi-ethnic star and producer, “may have been behind the film’s progressive approach.’

He goes on to say: “I think he’s one of those people who’s frequently annoyed by having to deal with and answer questions about ‘What are you? What background are you?’ And I think one of the things he wants to try to do with these movies — whether consciously or not — in achieving that effect is to sort of eliminate race as a point of conflict and use race as a sort of point of normalcy, which I think is a really revolutionary thing to be able to try to do and achieve.”

In his review in the Globe, Morris, writes, that “Fast Five” is “so far, the most honest Hollywood movie of the year. It’s also the most fun.“ He continues by noting that, “The movie beats you over the head with money even as it takes it from your wallet, and the lack of shame, as loathsome as some might find it, is refreshing for the brutal blatancy of crashing poetry into literalism: Money destroys everything.”

Well, well, an old biblical message packaged inside a speed flick filled with cartoon violence and car chases that The Onion jokes was written by a 5-year-old. Go see it and judge for yourself.