Of Lupe Velez, Celebrity as Deity, and More: An Interview with Russell Brand | via Boingboing.net

In “the hardest to read”* chapter in Tex[t]-Mex, the fourth chapter on Lupe Vélez entitled, “Lupe Vélez Regurgitated; or, Jesus’s Kleenex: Cautionary, Indigestion-Inspiring Ruminations on “Mexicans” in “American” Toilets,” I play with the idea of celebrities in the early 20th century as newly minted “saints,” with la Lupe a kind of early 20th century martyr–of no little assistance in this vein are the findings of Jeffrey F. Hamburger on the vera ikon 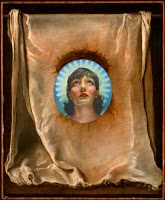 or “Veronica” (that scene in the new testament, immortalized in the stations of the cross, “station 6”, where Jesus leaves his face on a “Veronica’s” handkerchief, aka, the first snapshot).

You can see this idea reappear, with post-modern trappings, in this compelling interview with Russell Brand on boingboing.

“I’m not a huge Russell Brand fan (I’m don’t dislike him either, but most of his media came out after my daughter was born and I essentially embarked upon a half-decade adult TV and movie fast), but this is a remarkable interview. Brand gets some tough questions from the interviewer, and while he gets excited and even rants a little, he is consistently cogent, intelligent, and well-spoken. This is practically a master class in how to talk about celebrity while being a celebrity without sounding like a snob.”.
Cory Doctorow from BoingBoing