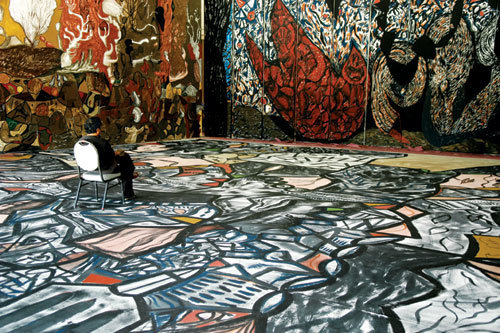 Gronk paints set designs for big bold operas, little intimate plays and even on the walls on the way in to his loft in downtown Los Angeles. A whole exhibition dedicated to his set designs is now at the Craft and Folk Art Museum (CAFAM). The show is immersive since you can actually experience being on one of his sets yourself. It’s also a fun show imbued with the spirit of bricolage as well as an ingenious juxtaposition of the high and the low.

The immersive part is the series of set designs themselves that are beautiful, labyrinthine, dense and intricate paintings that become part of the theatrical experience. Like characters in an opera or a play, they “speak” and play a central role. He’s also painted a set that you can actually perform in or simply stand on to get a feel of what it’s like to be on one of his stages. He recently had a performance of “La Tormenta,” one of his alter egos, on that set.

The fun part of the show is that besides his set designs, notes, and diaries of drawings, Gronk pays playful homage to the cult 1950s B-movie, “The Giant Claw.” It may be one of the worst movies ever made mostly due to its dreadful special effects. It was a joke without intending to be a joke. The movie’s low budget meant that instead of using the his first choice for special effects, FX master Ray Harryhauser, the director, Sam Katzman, was forced to hire an inexpensive special effects firm based in Mexico City. The result was a ludicrous puppet-like creature. An inside joke for the movie’s cultists is that throughout the movie everyone keeping repeating that the creature is “bigger than a battleship.” In actuality it was probably a few inches high. Where the Japanese gave us “Rodan” with it’s well-made believable flying pre-historic monster, Katzman gave us “The Giant Claw” where you can’t help laughing at the unbelievable creature flying around like a deranged kite. You can see the whole movie on YouTube and judge for yourself.

In the “Theater of Paint,” Gronk has sculpted the claw from the creature. In the movie the last thing you see is the claw as the creature sinks into the ocean after being killed. In the show, one big black claw hangs from the ceiling and another is installed on a circle of red carpet. Gronk really loves this movie. He did a whole book of fascinating drawings called “The Giant Claw that drew its inspiration from the movie.

I don’t know if the claw has an existential meaning for Gronk or not. It could simply be that he was taken with the idea that something so bad as the horribly concocted clawed creature would even star in a Hollywood movie. Or, the big claw could simply be the symbol of Hollywood itself as in, “you have to claw your way to the top” to be a star.

This is where the concept of bricolage comes into play. It’s a French word that basically means “do-it-yourself” and use whatever materials are at hand, the odds and ends, and create something new from that. The creature in “The Giant Claw” was an accidental form of bricolage. Imagine yourself at the studio in Mexico City where they built the bizarre and ugly papier-mâché creature. It seems they grabbed whatever was lying around to make the bulging eyes, the stringy hair, and the oddly shaped wings.

I was fortunate enough to have seen the 2005 world premiere at the Santa Fe Opera of Gronk’s set design for the opera, Ainadamar, based on the tragic assassination of the Spanish poet and dramatist Federico García Lorca. Lorca had been shot and killed on the outskirts of Granada by the Spanish fascists in August 1936 because, as the fascist’s own documents attest, they saw him as a “socialist and a freemason,” about whom rumors swirled of “homosexual and abnormal practices.” Gronk’s set design incorporated the warm color palette of the region into the set design and used the seed image as an organizing motif to literally set the stage for this sad but ultimately inspiring production dedicated to the power of the artist.

This set for Ainadamar by itself is high art. When Gronk’s series of opera sets are seen alongside the black sculptures of the giant claw from the B-movie you get a unique mixture of the high and the low. This is what makes the show interesting.

Opera is often seen as the art form preferred by elites and, of course, B-movies are usually the purview of the masses. The intersection is where you can find Gronk and “Theater of Paint” provides some serious fun and a worthwhile diversion in a hot summer filled with terrorist violence, unhinged politics and basically a world on the precipice.

In As You Like It, Shakespeare famously wrote, “All the world’s a stage/And all the men and women merely players/They have their exits and their entrances/And one man in his time plays many parts.” This resonates for me when I see Gronk’s painted stages and the many parts he’s played as an artist. It’s almost the perfect quote for a show of set designs and reminds us that life is a performance, we play many parts and then we’re gone in a flash and, if we’re lucky, someone might memorialize a part of us like maybe a claw.