An American in Provence

Posted on June 26, 2015 by adminbena
As an American heading to Provence after spending a week in Paris and then another week in Istanbul, I wasn’t sure what to expect. Yes, I knew of Peter Mayle’s classic A Year in Provence and years ago enjoyed watching the French films about rural Provence, Jean de Florette and Manon of the Spring. More recently, there was Ridley Scott’s amuse-bouche with Russell Crowe and Marion Cotillard, A Good Year, a film offering a picture perfect postcard image of Provence. I was also aware of the famous expats who had lived here at one time or another: everyone from Ernest Hemingway to Nina Simone. Perhaps I was expecting too much for one place to deliver. Well, we were in for a pleasant surprise. 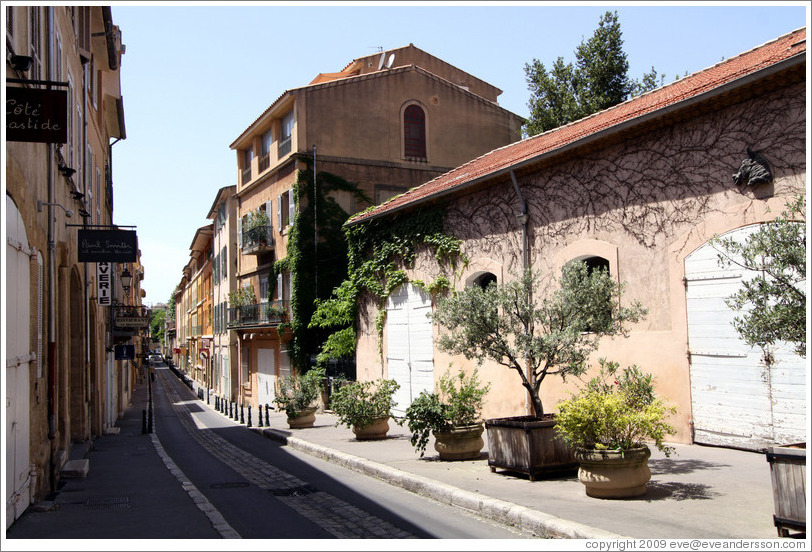 We arrived in Aix-en-Provence early one evening in mid-June from the Marseille airport to a charming apartment in the Quartier Mazarin, an elegant section of the city. The rooms were just a few hundred feet from the famous Place des Quartre Dauphins with its beautiful fountain (dating back to 1667) and, as we would later learn later from our tour guide, right behind the legendary Hotel de Caumont. All was good and then it started to rain and I mean it really rained.

Suddenly, we wondered if we had made the right choice but then we realized the weather–whether in Provence, Istanbul or Los Angeles–has a mind of its own. Anyway, there was a certain romantic feel to the rain especially when we threw open the French doors and the moist night air drifted into the apartment along with the soothing sound of rain falling on the cobbled street below.

Our time in Provence became unforgettable because we had come upon a recommendation for guided tours in Rick Steve’s Best of Europe 2015‘s section on France. He recommended Discover Provence, which is owned and managed by the British-born and French-fluent Sarah Pernet. Sarah and her team offer small intimate tours of Provence. So, instead of being tourists walking around lost and asking for directions in broken French, we were introduced to Provence in the best way possible.

Our first full day in Provence began with Sarah leading a tour to the stunningly picturesque perched villages of Luberon. Not only did Pernet take us to the well-known villages such as Gordes and Roussillon, she also took us to some of the villages off the beaten track. As you tour these hilltop villages you also pass fields of lavender and olive trees. Since it had rained the night before the air was full and the scent of the damp soil mixed with lavender, rosemary, and an earthy aroma wafted through the air, something that I had never smelled before. Call it the natural perfume of Provence. 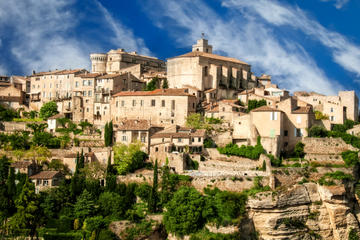 At one point, Sarah stopped at the side of the road next to a field of lavender. There was a muddy and clay-like feel to the soil. She even said if that if we weren’t careful we’d sink right into the ground. It was a bit like quicksand. Again, there was that aroma and it was then that I knew that this was part of the secret allure of the place: the soil, the air, the wind, and the calm aliveness that surrounded us. Along with the strong scents in the air it was also the light violet hue of the lavender next to the pale green of the olive trees, and the dark green of the grape leaves on their vines. I would learn later there was one more ingredient that made Provence even more captivating. 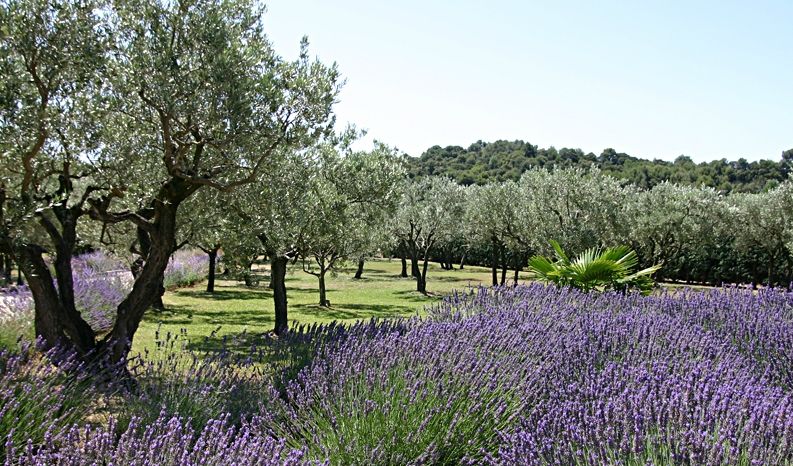 Every step along the tour Sarah combined historic, geographic, cultural, and local flavor to give us a true sense of the hilltop villages and their surroundings. As I mentioned, she also took us to lesser-known villages and a special treat was Ansouis with its 1,000-year-old chateau. As Pernet told us, the villages were perched high on the hills because they were originally built as fortresses for protection from attacks by encroaching battling families, armies, and outsiders. 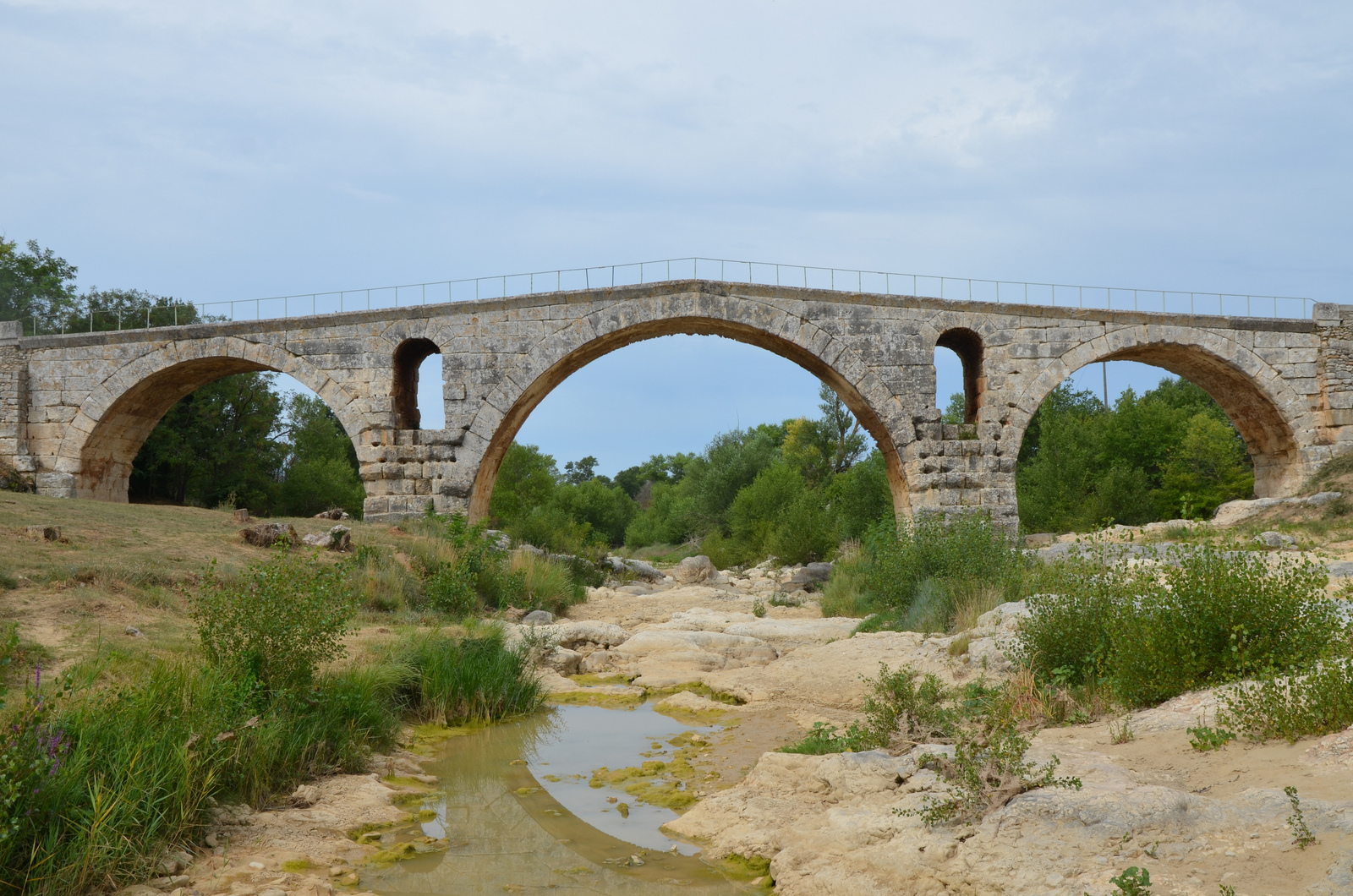 Along the way we stopped for a photo at the Pont Julien, a classic and beautiful Roman bridge with three arches spanning over the River Calavon. This was near the village of Bonnieux and Sarah told us that the bridge was built in 3BC and took twenty-five years to complete. It really is a superb bridge even now in the 21st century. She said that it remained in use until quite recently. Although we never made it to Avignon and the famous Roman aqueduct, the Pont du Gard, seeing the Pont Julien was the next best thing. The Romans knew how to build things to last.

The next day we took a walking tour of Aix-en-Provence. Sarah walked us from the main fountain in the city, the Fontaine de la Rotonde, to sights throughout the town. One of the highlights was seeing the high school, the Collège Bourbon, that Paul Cezanne, the famed Aix-en-Provence-based painter, attended and where he met his great friend, the writer Emile Zola.

It was also there at that Collège that Cezanne, Zola, and another close friend named Bastistin Baille spent so much time together that they became known as “les trois inséparables” or simply, the inseperables. Sarah told us that a film is being made about their intense friendship called, of course, The Inseperables, to be released sometime in the next year.

The Card Players by Paul Cezanne

Interestingly, it’s only a ten-minute walk from Cezanne’s birthplace to his grave. There are brass studs actually built into the sidewalks in Aix with the letter C standing for Cezanne and if you follow them you embark on a self-guided tour of Aix about Cezanne. Some tourists have actually taken the studs out of the sidewalks as souvenirs.

The highlight of our time in Provence was a truffle hunt at a secret farm that Sarah had arranged. She even joked that we had to be blindfolded so the farm’s location would remain a secret. When we arrived the sun was bright and shining. The farm itself was exquisite. There were grape vines, olive trees, oak trees, beehives, cherry trees, and pomegranate trees coupled with the now familiar splendid ripeness that is Provence.

The host, a Frenchman named Johann, gave us a deep dive into the truffle business. He had purchased over 500 oak trees and planted them throughout his farm. He said that maybe 25 percent would be the trees where the spores of truffle would grow. The oak trees are planted and then nearly seven to ten years later you learn whether or not truffle spores have taken “root” near an oak tree. 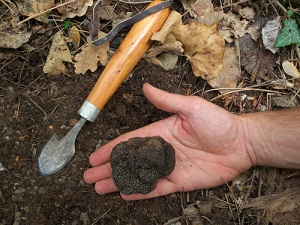 We hunted truffles along with a truffle hunter named Jean-Marc and his two dogs. One, a cute two-month-old mixed breed called Éclair, was just learning how to hunt truffles. The dogs smell the truffles in the ground and begin to dig and then the hunter goes over and finishes the dig and brings up the found truffle. Before long we had a basket filled with summer truffles since this was June. They are pungent and musky but still not as pungent as the more sought after winter truffles.

After the hunt, Johann took us back to the main house where his wife, Lisa, took our basket of truffles (truffe in French) and served them sliced with cheese and bread plus champagne or a red wine produced from grapes grown on the farm. She also served us truffle ice cream made by a local ice cream maker who drives a jaunty yellow ice cream truck to all the farm markets around the area.

It was then that we experienced the final and most important ingredient that made our time in Provence special. It’s the people. It was Sarah, Johann, Lisa, Johann’s 92-year-old grandparents smiling and waving to us, and the gentile lifestyle that they all live and love. We sat by a cool blue swimming pool sipping wine and champagne as the sun set. We talked. Everything mixed together to show us that for those moments on a beautiful farm it was a way of life that is Provence at its best.