The Grand Adventure of Vera Caspary 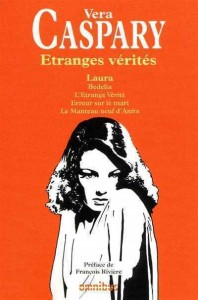 In Vera Caspary’s absorbing autobiography The Secrets of Grown-Ups (1979) recounting her life as a writer, she avows, “This has been the century of The Woman and I know myself fortunate to have been part of the revolution. In another generation, perhaps the next, equality will be taken for granted. Those who come after us may find it easier to assert independence, but will miss the grand adventure of having been born a woman in this century of change.”

Born in Chicago in 1898 to a middle-class secular Jewish family, Caspary was inspired as a young girl to become a writer when she met her friend’s aunt, a published author. On finishing high school, Caspary decided not to go to college but to seek a writing job, and wound up a stenographer. Soon she was writing the instructions for a mail-order course for the Sergei Marinoff School of Classic Dancing, though she knew nothing about ballet. Further assignments included composing a screenwriting course, which would prove helpful later in her career. She wrote for ad agencies, niche magazines, even wrote copy for The Rodent Extermination League of America. When she had saved enough money, she quit these sorts of jobs in order to stay at home and write “something meaningful.” The result was a novel she never published. 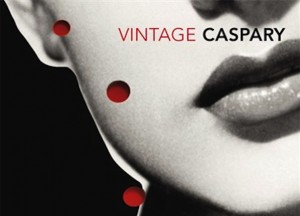 In the mid-1920s Caspary accepted a job in New York City writing for Dance Lovers Magazine. She took a studio in Greenwich Village, and reveled in Bohemian life at a time “when sexual inhibition was to be avoided like pregnancy and a repressed libido shunned like a dose of clap.” In her hard-boiled prose style, she describes those boom years before the crash: “Young wives measured devotion by the inches of diamond bracelets and kept women spurned mink to wrap themselves in chinchilla.”

Never having much money, when the depression came, she didn’t have far to fall. Others fared worse, and she guiltily watched much of the population sink into destitution. Many blamed capitalism. Caspary flirted with communism, joining the party under a pseudonym. In 1939, she traveled to the Motherland: “I had gone to Russia to see how people lived in a world that to the Daily Worker was paradise, to the Daily News hell.” She left disillusioned with the Red promise.

Caspary moved to London toward the end of the war to be with her lover, exiled Austrian film producer Isidor “Igee” Goldsmith. She describes her experiences, as an American, of rationing, air raids, the liberation of the concentration camps, and the bombing of Hiroshima and Nagasaki. Summoned to Los Angeles for a screenwriting job, she went and enjoyed a lucrative career there until she was gray-listed during the McCarthy era. At the age of fifty, she married Igee, the love of her life, and they split their time between Europe and California.

Throughout Caspary wrote — articles, stories, plays, screenplays, and novels — with varying success. In Secrets, she confesses: “I’ve known rejection enough to make a sane person quit but, having known the raptures and torments of the storyteller, I can no more stop writing than stop breathing.”

In her work, Caspary’s chief thematic interest is in questioning stereotypes and assumptions. She peered into a life, a relationship, a family from an angle that would reveal alternative ways of seeing, of being. Her first published novel, The White Girl (1929), is about an African-American woman who moves from the south to Chicago, where she passes as white. Music in the Street (1930) was set in a working girl’s residence. She adapted it for the stage as Blind Mice, featuring an unprecedented all-female cast. The play formed the basis for the 1931 film Working Girls directed by Dorothy Arzner. Caspary turned her Cheeveresque short story “Suburbs” into the 1932 film The Night of June 13th. That year she published her magnum opus Thicker than Water, a 425-page autobiographical saga chronicling the trials and tribulations, conundrums and prejudices of a Sephardic Jewish family living in Chicago in the early twentieth century.

By the end of her career (she died in 1987), Caspary had written eighteen novels, countless stories, plays, screenplays, and treatments from which twenty-four movies were made, including Joseph Mankiewicz’s Letter to Three Wives (1949), Fritz Lang’s The Blue Gardenia (1953), and George Cukor’s Les Girls (1957). With nearly all of Vera Caspary’s work now out of print, she is most remembered in connection with Otto Preminger’s 1944 classic noir film Laura, based on her eponymous novel.

Caspary’s psycho-thriller Laura (1942, republished in 2005 by Feminist Press) is a pitch-perfect detective yarn that manipulates the tropes of the genre to explore the intersection of class, crime, and sexual politics. Her plot twists are ingenious, her characters expertly drawn, and her prose style as refined and faceted as the best of Raymond Chandler. Told from the viewpoints of multiple narrators, the subject is ostensibly the brutal murder of Laura Hunt, a highly successful advertising executive loved and respected by all; but what the dour, reluctant NYPD Detective Mark McPherson ends up investigating is Laura’s life. In the process he falls in love with a dead woman. Via the multi-perspective narrative, Caspary leads her reader down dark alleys, around blind corners, through the threats and hazards a woman must confront in negotiating her way through a male world.

In the film version, Caspary was outraged by Preminger’s characterization of Laura as a dithering ninny whose power lay in how men perceived her, symbolized by Laura’s portrait, omnipresent in the film. (In the book, the portrait is much less prominent and suggests Laura’s strong individualism.) Preminger famously called Caspary’s Laura “a nonentity with no sex.” Caspary responded, “Do you mean she never got money out of men or mink or diamonds? That doesn’t mean a girl’s sexy, Mr. Preminger, it just means she’s shrewd. My Laura knew how to love, enjoyed more than one lover, and enjoyed her lovers lustily.” The feud culminated in an infamous shouting match between director and writer at The Stork Club.

Following the success of Laura, Caspary wrote many more noirs, including Bedelia (1945, Feminist Press 2005). Set in 1913, and with a nod to classics such as Madame Bovary and Lady Audley’s Secret, Bedelia is about a frustrated housewife who turns psychotic. In Bedelia, the idealized housewife becomes a figure of menace, the trapped and dissatisfied Angel-in-the-House transforming into the Murderer-in-the-House. As in much of Caspary’s work, she conveys the subversive idea that something is terribly wrong with relations between the sexes, emphasizing a woman’s need and right to intellectual and financial independence.

As Caspary predicted, in the twenty-first century equality for women is often taken for granted, yet certainly has not been achieved, with glass ceilings still firmly in place. The prevailing message of Caspary’s work is timeless: Diamonds aside, ambition is a girl’s best friend and the gateway to the grandest adventures.

Jenny McPhee’s novels include A Man of No Moon, No Ordinary Matter, and The Center of Things. She lives in London, but mostly she resides at www.jennymcphee.com.