The Poet as Ambassador 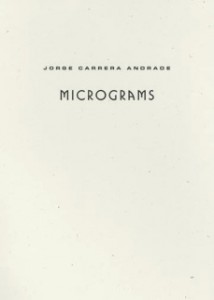 I don’t know who should be more insulted: Jorge Carrera Andrade because I’ve waited to get to Ecuador to read him or Ecuador for my number one concern being Jorge Carrera Andrade. Yes, I came to Quito ready to ask, Where do you keep your Jorge Carrera Andrade books? The poet Carrera Andrade had better questions thankfully, which is probably why he became an Ecuadorean ambassador, granting him a nice stable salary, along with the chance to live in places like Japan, where in fact he birthed the tiny book in question: Micrograms.

The most surprising thing about looking for Carrera Andrade in Quito is that you can find him in English easier than you can in Spanish. I went to five different bookstores and only one had a book called Micrograms — it was the English translation. This might have something to do with the fact that, according to Quito Imaginado, books are normally printed in runs of 1,000. There are over 10,000 Americans living in this capital city of 2,000,000. When I did finally find his complete works in Spanish it was in a school library, stiff as a salted fish. But then I guess the same is probably true of so many other poets (what the Ogden Nash?).

If you know the Latin American Modernist type, Jorge Carrera Andrade — his life — doesn’t offer many surprises. “Poet” was like an internship you did to become “ambassador” which lead you to a life as a “man of letters.” Speaking of letters, I found a two volume edition of his memoir in Colombia and got bored about a tenth of the way through. Did they really have to go for the second volume? There of course is a vast literary history from where Carrera Andrade protrudes, betwixt visits from illustrious European writers (Henry Michaux), kinship or maybe competition with Alfredo Gangotena (who ditched Spanish for French a few times), and a flare for being a champagne socialist, which I guess comes with the territory of being a politician and a poet in a country where literacy was a problem.

But back to the book at hand. The microgram is, well, micro (there is a joke here about William Carlos Williams and “micromachines” but I will spare you), aphoristic, light, and most certainly lyrical. Honestly when I found them in his Complete Works they didn’t stand out to me. We’ve seen this trick before. A butterfly is a “Bandaged child,/ when you unfold your wings:/living leaflet of the field.” The alphabet? “Birds are/ gods handwriting.” And so on. The stillness of haiku is blended together with elements of the much less well known, and raucous “saeta,” “the elder daughter of Spanish popular song.” See, Carrera Andrade will be the first to tell you: Micrograms are not actually his invention. Some of the names he cites Federico García Lorca (“Nobody can thread a needle of eternity with popular melodies like he can”) and Rafael Alberti (“fragrant drops of song”) and Jorge Guillen (of “metallic hardness”) as inspiration, not incidentally some of the same names the writers in the above paragraph, with one important distinction: Carrera Andrade translated French avant-garde poet Pierre Reverdy. Now that might not sound like much, but let the Reverdy English translator list speak for itself: John Ashberry, Ron Padgett, Kenneth Rexroth. Only that Carrera Andrade is doing this fifty years prior to them.

Thus the eerie feeling on gets when he envisions things like, “The new cosmogonic consciousness of life will extend from the country to the city, matrix of the new man. And the microgram, that tiny lyrical composition whose name only I have invented, will bloom again, more vital and suggestive than ever.” The belief here is as the elements of nature die off the poem becomes a living memory. Well, that’s much more interesting than what’s actually happening in the poem. While there’s are some elements of Futurism (“the Age of Steel”) in his essay he’s not at all for it, and while he seems conscious of industry’s encroachment on nature, he’s not really that against industry either. These are safety poems, in case of, and potentially rare, endangered poems.

That’s about all there is, at least that, it was for me. Not only do I like Wave Books’ edition more, I liked the Alejandro de Acosta and Joshua Beckman translation much more than the original. This may sound strange, but consider that each of these micrograms there are only a few dozen letters. In Spanish these poems begin to look the same, and occasionally the word choice is almost unsurprisingly simple (which I’m sure is intentional). The translation however offers a different alphabetic topography and more dissonant sounds. Without going to the lengths of comparing the two, I’ll just cite “The Spider”:

While “spider” and “shoulder” share some sounds “epaulet” is all on its own, dangling even (never mind that it breaks with the haiku form the original had).

To go a step further, I liked the essays more than the poems, both Andrade’s and the translators’. It happens. It’s like when you like the liner notes more than the music (although I think this simile is dated now that we’ve done away with CDs.) A Latin American history of the haiku? Well, god damn, I’ll be. And so we read about the Mexican avant-gardist, Manuel Guitierrez Nájera and haiku, alongside other far more obscure names, like Flavio Herrera, Umaña Bernal. Then we circle over to the French haiku writers, Julien Vocance and Paul-Louis Couchoud (seems like everyone was writing haikus in the twentieth century, except the Japanese) before we wind up with the Surrealists. You get the feeling that Carrera Andrade has written a lot and wants you to know that. You also get the feeling that this is why he expects literature to go global.

As great as this project is, I’m still wondering how much longer translation will be digging in the Latin America crates. Thanks to a shift away from neoliberalism in many countries, there has been an effort to embellish (that is, preserve) indigenous languages, much in the way that Spain or Israel did long ago. While it’s fantastic to rescue and renovate Spanish-language writers, I can’t but help these new signs in Quichua (as it is spelled in Ecuador) and wish I knew more. Maybe they too are saying something about the disappearing macaws and frogs.