THE SCARLET EMPRESS, THE IRON LADY, AND MY CAB DRIVER 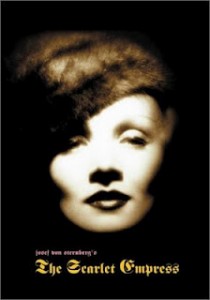 Since the phenomenon of women in power is still rather rare, inevitably we develop a fetishistic relationship to those exceptional women who do somehow manage to rise to the very top of the political ladder. We regard these women as at once bewitching and bewitched, and they arouse in us the tantalizing dread of being eaten alive. One of my favorite renditions of our convoluted eroticization of female power is Joseph von Sternberg’s 1934 film The Scarlet Empress in which the sublime Marlene Dietrich plays Empress Catherine II of Russia. At the Court of Elizabeth I in St. Petersburg, amid glowering gargoyles, magnificent ball gowns, and astounding opulence, the innocent Prussian Princess Sophia discovers that her predilection for frivolity is matched by a lust for power. She uses her devastating beauty, charm, sexual appeal, wit, and intelligence to ruthlessly get on top and stay there, where she will exert absolute power as Catherine The Great.

A less visually phantasmagoric but equally perverse vision of female political power is presented by The Iron Lady, starring the venerable Meryl Streep as British Prime Minister Margaret Thatcher. The screenwriter and director (both women) mostly show Thatcher (respectfully dubbed the “Iron Lady” by the Soviets) as a demented old crone carrying on a hallucinatory relationship with her insidiously judgmental dead husband. In the flashbacks to her ride on top, we are barraged with a gloss of footage displaying the mayhem that occurred under her watch (miners’ strikes, IRA attacks, the Falklands war, etc.). Thatcher ultimately lost power, the filmmakers would have it, due to a hysterical outburst at a meeting during which she humiliated her all-male cabinet in a harpyish diatribe, accusing them of being cowardly, imbecilic, and weak. Undoubtedly some version of this scene could have actually taken place, but I object to the assertion that Thatcher’s feminine wiles brought about her downfall. The biopic did not provide me with any particular insight into the character, much less the policies, of the infamous PM, but I was, nevertheless, weirdly entertained.

Recently, I was wonderfully entertained — and edified — by reading Robert K. Massie’s new biography Catherine the Great: Portrait of a Woman. The Pulitzer-prize winning author of Peter the Great, Nicholas and Alexandra, and The Romanovs seeks in myriad ways to de-fetishize Catherine by placing her extraordinary rise to power within a full context, providing a nuanced geopolitical history of eighteenth-century Russia along the way. Massie often presents Catherine to us in her own words: his narrative draws heavily and felicitously upon her extensive diaries and thousands of letters; her lengthy correspondence with Voltaire and Diderot is of especial interest. Massie flushes out her most important relationships: with her mother, her father, her husband the Grand Duke Peter, with the Empress Elizabeth, and finally with her twelve lovers — she was a serial monogamist. The two most significant, both romantically and politically, were Gregory Orlov and Gregory Potemkin. Together with his brothers, Orlov, a military man, helped Catherine gain the throne. Potemkin, who quite likely became the Empress’s husband, was crucial to her reign as political advisor. Even after their sexual liaison was long over, he acted as her military commander-in-chief, was appointed governor and viceroy of half of her empire, and created the majority of her new cities, seaports, armies, and fleets.

Catherine’s accomplishments during her three-decade reign are impressive. She expanded Russia into the Ottoman Empire to the Black Sea and oversaw the building of the Russian navy; she was a pioneer in public health, becoming the first royal anywhere in Europe to be inoculated against smallpox, saving millions of lives by example. She discouraged the rampant practice of infanticide by establishing foundling hospitals with a system of baskets, pulleys, and bells so that a mother could be assured of anonymity. She sought to educate and enlighten the Russian nobility by acquiring significant libraries and art collections from Europe. Next to the Winter Palace, she built a smaller palace to house her acquisitions. She spent much, and certainly her happiest, time within its walls. She forbade all court formalities there and insisted that whoever walked through its doors call her simply “Catherine.” She encouraged open discussions, freedom of thought, and a love of learning. She called her haven The Hermitage.

Her greatest achievement, however, was the drafting of a new Russian constitution, the Nakaz, and the creation of a legislative commission charged with establishing a new code of Russian laws (which ultimately failed). As Massie notes, this took place “nine years before Thomas Jefferson wrote, and the Continental Congress voted to approve, the American Declaration of Independence.” According to Massie, the only woman to equal her on a European throne was Elizabeth I of England, and he credits Catherine II with bringing “European moral, political, and judicial philosophy, literature, art, architecture, sculpture, medicine, and education” to Russia.

Massie’s prodigious talent for presenting historical fact, supposition, and analysis delectably makes Catherine the Great a riveting history of a woman and her remarkable relationship to power. Ultimately, however, and this becomes clear almost from the outset, on a subtextual level the book chronicles a passionate romance between the author and his subject. Like von Sternberg, whose camera in close-up adoringly lingers on and makes love to Dietrich’s incredible visage, Massie’s Catherine — idolized, idealized, the beloved — is just a tad flawless as she, say, takes over Poland or encourages the practice of serfdom, maintaining over ten million peasants in slavery. Someday a leader’s sex will be just another humdrum characteristic, though not in my lifetime. In the meantime, I’m dying to know who will play Catherine in the revival version of the film based on Massie’s book. My bet’s on Charlize Theron.

The other day, I was talking to my cab driver, as one does in London, about The Iron Lady. He told me he didn’t go see the film because if he had, his father would have killed him. “The very thought of her still makes him apoplectic,” he explained. “I grew up chanting ‘Margaret Thatcher, milk snatcher,’ you know, because of her education cuts. But that movie was made for you Americans,” he went on. “It’s got more to do with Meryl Streep than Thatcher. Whoever made it was cynical, smart, aiming for the Oscar. You know, the crazy woman always wins.”

The odds most definitely have it.

Jenny McPhee’s most recent novel is A Man of No Moon. She lives in London, but mostly resides at www.jennymcphee.com.