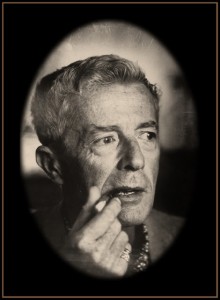 Long before Eno’s oblique strategies, Paul Bowles described his own method for excising the ego by introducing randomness to the artistic process, in this case narrative story-telling. In his brief but illuminating introduction to the short story collection A Hundred Camels in the Courtyard, Bowles says, “In 1960 I began to experiment with the idea of constructing stories whose subject matter would consist of disparate elements and unrelated characters taken directly from life and fitted together as in a mosaic. The problem was to create a story-line which would make each arbitrarily chosen episode compatible with the others, to make one lead to the next with a semblance of naturalness.”

Bowles’ solution was to create a literal mosaic, generating a list of characters, “incidents and situations that I had witnessed or heard about that year,” then combine them. Once Bowles had his list (“A held a grudge against B, when B was made a police man,” “C acquired an old pair of shoes from D,” etc.) he needed something to bind the storylines together. Choosing as his subject the community of Kif-smokers in Morocco, he realized: “By providing Kif-directed motivations, I was able to use cannabis as both a solvent and solder in the construction.” 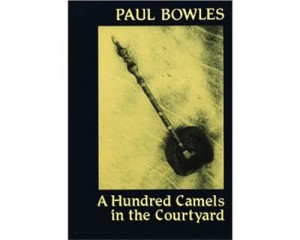 Inspired by Bowles, I used this method while writing “Lives of the Saints,” a film I’m shooting later this year. I drew my list from people I know, barely knew, or heard about. My list partially reads: “A is an alcoholic acting teacher trying to reconnect with her daughter, B is a young drifter who left his family following the death of his sister, and C is a middle-aged professor from the Midwest, journeying to the city to search for his runaway daughter.” My “solvent” in this case, was the characters’ aching desire to reconnect with their families after a traumatic event.

Just as Eno intended his OS cards to break a deadlocked artistic situation, so Bowles’ method can be useful for smashing through writer’s block. It also takes the focus off plotting, allowing a narrative to unfold, unforced and organically from character, via the collision of those characters’ trajectories. The dizzying result can be the disappearance of the writer’s hand, and the birth of a world that feels authentic and random.