Posted on November 22, 2011 by adminbena
Max Benavidez on Delgado-Qualtrough’s The Cosmological Lotería

We love games of chance. Whether it’s throwing dice, playing a card game or having our fortune told by a tarot card reader, we enjoy the luck of the draw. These games can be serious as well as entertaining. One of the best known is the Mexican Lotería, a deck of 54 cards with kitschy images or pictograms. The names and images on the cards represent various messages and also riddles that carry certain interpretations. 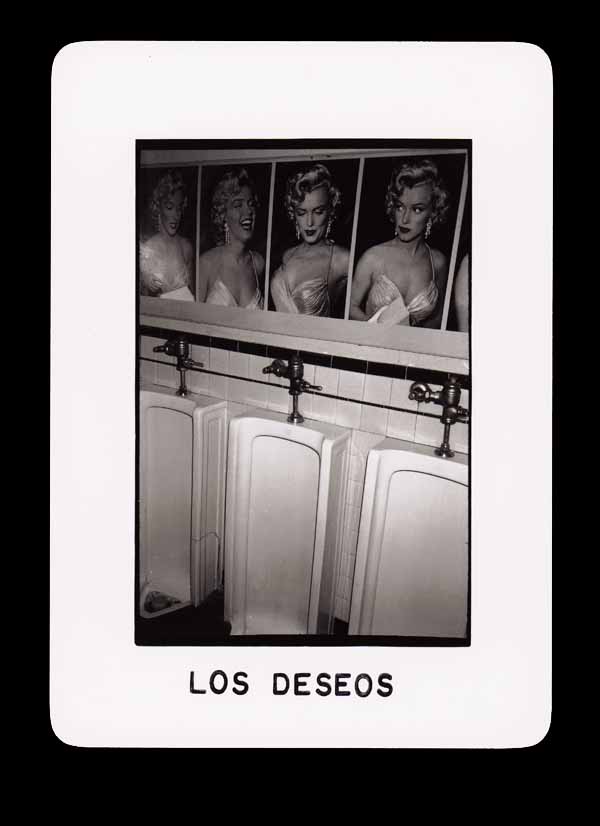 For example, the image of the Rooster (El Gallo) is about betrayal in various forms. The Rooster hails back to the Bible and Peter betraying Jesus, who had predicted: “Before the rooster crows, you will disown me three times.” The Mermaid (La Sirena) is another card. She stands for the power of unbridled emotion. It goes back to the Greek story about Ulysses, who made a pact with his soldiers while they were at sea and were approaching the Sirens. He wanted to hear the Sirens’ mesmerizing song, but he also knew that if he did that he would then be incapable of rational thought. So he put wax in his soldiers’ ears so that they could not hear, and had them tie him to the mast so that he could not jump into the sea. He did go temporarily insane and tried to break free so he could join the Sirens, which would have meant his death.

These are not light subjects. And now we have a new creative interpretation of the lotería deck to consider: artist Luis Delgado-Qualtrough’s The Cosmological Lotería. Currently on view at The Beverly Project in Los Angeles in an exhibition called Lotería and Metaphors, Delgado-Qualtrough’s The Cosmological Lotería brings the deck into the 21st century by depicting our ongoing struggles with each other, with nature and with the intractable structures of society.

Rather than the classic cheesy images of the Mexican deck, Delgado-Qualtrough has created exquisite gelatin silver photographs of existential experiences. Picture the Mexican lotería as imagined by Albert Camus and photographed and printed by Ansel Adams and you have an idea of the lustrous and ironic feel and tone of Delgado-Qualtrough’s work in the show.

A stand out in the show is “Los Deseos” (The Desires) which features a set of black-and-white images of Marilyn Monroe set atop of a series of old-style urinals. The juxtaposition works. By combining Monroe, the enduring symbol of glamorous sexuality, with everyday porcelain urinals, Delgado-Qualtrough captures the dual nature of desire. It can be both alluring and grimy, filled with flights of illusion but grounded in the hard truths of attraction and consummation. His other cards include “The Doubts,” “Torment,” “Temptation,” and “The Obstacles.” There is something in this deck for almost every human mood and condition.

William Moreno, who is known for his pop-up galleries, and is the former director of several museums including The Claremont Museum and the San Francisco Mexican Museum, curates the show. Moreno has taken a small annex space of the ChinMaya Gallery in East Los Angeles and turned it into a gleaming cosmopolitan example of how to display art in today’s hit-and-run art world. There is an ephemeral quality to the presentation of the exhibition, which perfectly matches Qualtrough’s moral questioning of human existence and its meaning.

“El Infierno” (The Inferno) is another image that shows Delgado-Qualtrough at his best. This is Dantesque, no doubt, but the work is also a contemporary examination of the tortured hell of life. Figures writhe in pain, whether emotional or real we don’t know, but it’s clearly not a passing thing. This is real and Qualtrough digs into the soul to capture its mysterious essence.

Delgado-Qualtrough also presents his prints in a lovely box with directions for playing the game. As he writes in the instructions: “Your interpretations will deepen the more you play the game.” And the same is true for The Cosmological Lotería. The more time you spend with the images, the more that hidden truths reveal themselves.