Posted on August 24, 2011 by adminbena
Max Benavidez on “Asco: Elite of the Obscure” at LACMA

When “Asco: Elite of the Obscure” opens Sept. 4 at the Los Angeles County Museum of Art (LACMA), we will witness the closing of a 40-year-old cultural loop. During the exhibition, a famous Asco (pronounced “oss-ko”) image will be seen all around L.A., as Bank of America, one of the show’s sponsors, will utilize one of the art group’s most compelling works, the 1974 “Instant Mural,” on its ATM screens. This is an interesting juxtaposition and demonstrates how the mainstream has caught up with the Asco sensibility of simulated appropriation and hip transgression and also how commerce, art and the burgeoning Latino market are intersecting in new and innovative ways. 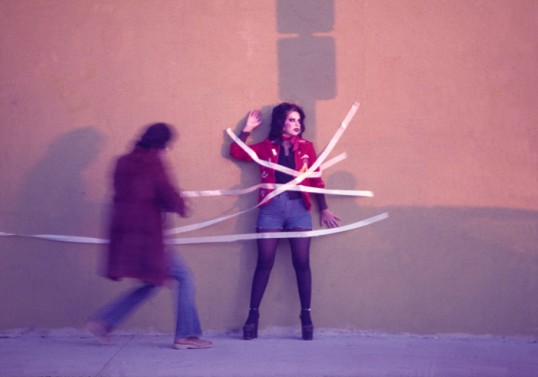 The LACMA show, which is part of the huge Getty-sponsored Pacific Standard Time (PST) series of exhibitions, is a great opportunity to formally applaud the genius of Harry Gamboa, Jr., Gronk, Patssi Valdez and Willie Herrón, III, the founding members of Asco, for their groundbreaking body of work. “Asco” means “disgust” or “revulsion” in Spanish, and they called themselves that because their work evoked nausea in so many people. (The show’s title, “Elite of the Obscure,” came from Gamboa, who also coined other memorable terms, such as “urban exiles,” “phantom culture” and “orphans of modernism” to refer to Asco and metropolitan Chicanos in general.)

What makes “Instant Mural” so potent is that it verges on being a photorealistic painting, but it’s not. It was a spontaneously staged street event with a timeless cinematic quality that commented on the proliferation and content of Chicano murals, as well as the closed-off art world. Gronk, in a flowing, burgundy coat, is taping a dramatically posed Valdez in red bolero jacket, blue-jean shorts and black velvet high heels to a creamy, orange wall and doing it as quickly as possible, as if their lives depended on the speed of the act. It gives the image an ephemeral quality that illustrates how Asco mixed street art with performance art to create a new, expressive hybrid form of high and low: postmodern punk art. As Gronk said about the piece, “I think one of the important things about our activities was the idea that we didn’t ask for permission to do any of the work.”

Aesthetic spontaneity and a cool desperado posture: that’s the essence of Asco’s work and its legacy. And, now, in a remarkable twist of fate, its work will be viewed on the ATM screens of one of the world’s largest financial institutions.

It all began 40 years ago, deep in an East L.A. barrio, where four teenagers sitting around in a garage formed Asco. While it sounds like something out of Silicon Valley lore, it actually parallels other art movements, such as surrealism and Dada, that started in times of desperation and disillusionment. It was a time of war (Vietnam), and much of East L.A. was nearly in a state of police occupation.

The members of Asco were bored by the same old same old art they saw all around them, so they set out to execute their own unique artistic vision. They made “No Movies,” which really aren’t movies at all, and took the idea of the protest mural to its logical conclusion with the “Instant Mural” and the “Walking Mural.” They also created daring street performances that recoded and satirized mainstream and Chicano cultures, as in “First Supper (After a Major Riot).” In the process they made history.

For the first time in American art history, a Chicano art group was working at the edge of art’s boundaries, creating new paradigms, and turning both modern art and Chicano art inside out. Interestingly, and this is what makes the return trip to LACMA a historical event, Asco was working in a critical void and was virtually ignored by the mainstream art world that heralded so many other national and international artists who were working in similar veins. This was a classic case of Freud’s “distortion of a text.” The text, in this case, is the record of American art, and Asco and the meaning of its work was suppressed and annulled, partly through denial and partly through simple neglect and ignorance. In many ways, this circling back to LACMA is a triumph for the collective.

Beyond the kudos and acknowledgment, we also have to keep in mind that history’s nightmare not only repeats itself but, as Voltaire said, “history consists of a series of accumulated imaginative inventions,” and this show is a 21st-century imaginative invention. The truth is that the art world, like Asco, is tired of the same old same old.

The Asco circle of disruption closes quite neatly since their most famous intervention occurred in 1972 at LACMA, almost 40 years ago.

Here’s what happened. They went to the big, public-funded museum, LACMA, to see if they could show a curator their art. The curator said something like this: “No, you people aren’t fine artists, you’re gang bangers and folk artists.”

That enraged Asco so much that they sought an appropriate response so they decided to spray-paint their names on the museum and document the act. If they were thought of as taggers, then there was no reason not to brand the whole museum as their work of art. They called it “Spray Paint LACMA.” It was the most audacious piece of conceptual art ever affiliated with LACMA. It also established Asco as a truly avant-garde, conceptual art group, along the lines of other legendary collectives like Fluxus, Archigram, Guerrilla Girls and others.

During its heyday, which ran from about 1971 to 1987, Asco was a truly underground phenomenon, and the group displayed a rare sensibility. They were constantly innovating in a media vacuum on the streets of East L.A. At the same time, they also reworked contemporary urban identities for young Latinos, and, above all, they documented everything.

One of Asco’s most subversive interventions was the “No Movie.” These were images that the group circulated by mail in a series of satirical press kits and production stills. Hollywood barely acknowledged Chicanos and other Latinos during the height of Asco’s creativity. To Asco’s credit, it did something about it. It commented on this big-screen invisibility through the “No Movie” concept.

The “No Movies” imagery was enigmatic and alluring. Asco also created evocative titles, such as “A La Mode” and “No Tip,” that referred to nonexistent films while constructing themselves as film stars in the process. The “No Movie” photos simultaneously denied and affirmed the viability of an alternative cinema, and in their surrealistic, often campy theatricality, they reclaimed a violent and alienating urban environment as the stage for subversive glamour. By producing “No Movies,” Asco essentially countered the Hollywood film industry’s negation of Latinos by emotionally compressing rage, distress and scathing commentary (that still rings true) into their imagery.

So, take a trip to LACMA and catch the work of these now-classic provocateurs, because, as the Walrus in “Alice’s Adventures in Wonderland” said, “the time has come, my friends…” for Asco.