Pharaoh in a Cage: Five Lessons from the Mubarak Trial

Posted on August 3, 2011 by adminbena
Guest blogger Bruce Feiler on the meaning of the Mubarak Trial

The Mubarak trial might be symbolic, but what a symbol! 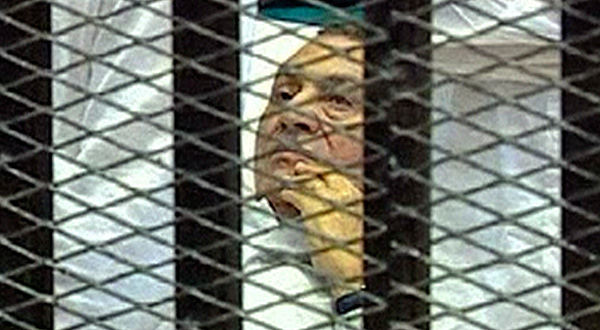 Video image taken from Egyptian State Television via the Associated Press shows Hosni Mubarak on a gurney inside a cage in a courtroom in Cairo on August 3, 2011.

The sight of former Egyptian dictator Hosni Mubarak, his two sons, and other members of his regime in white prison fatigues, behind bars, in a cage in Cairo is the most significant event in the Arab Spring since his ouster six months ago. It’s a much-needed boost for the beleagured youth movements across the region, and a chilling reminder to other strongmen across the Muslim world (including Iran) that history is being remade before their eyes.

The trial couldn’t come at a more important time. Egyptians have grown increasingly frustrated with the pace of reform; President Assad is stepping up his massacre of protestors in Syria; Libya and Yemen are increasingly chaotic. Plus, all this is happening against the religious backdrop of the holiest month of the Muslim year, Ramadan, giving it a powerful, spiritual dimension.

So what is the significance of the Mubarak trial? Here are five lessons.

1. Visuals matter. Until Mubarak was actually rolled into court this morning on a gurney, his voice weak, his hair still dyed, (once even picking his nose), most people in Egypt doubted he would even show up. Twitter feeds breathlessly documented every step of his journey from a Sinai hospital to the cage in Cairo. Even his sons stood directly between him and the television cameras (and later swiped at still photographers), like henchmen protecting a Hollywood starlet from paparazzi. The reason: Pictures matter. And this picture sends a very clear message that nobody is above humiliation.

2. The Arab Spring is still alive. The conventional wisdom in Egypt of late has been that the youth protestors of Generation Freedom have been marginalized, and the real battle for power is between the armed forces and well-organized, if fractious Islamic groups. But the fact that this trial is being held at all — and televised — is testament to the continuing influence of youth protestors, who held several rallies this summer to demand accountability for the over 800 people during the revolution. The youth movement may be lacking in organized political clout, but it can still drive events.

3. Revolutions matter. The real significance of the Arab Spring lies in the coming of age of a new generation of Muslim youth, who represent 60 percent of the Arab world and a total of 1 billion people across the globe. One in seven human beings alive today is a Muslim under 30. For the last three decades, the only narrative of change these better-educated, economically frustrated young people have been offered is that of the extremists. The uprisings in up to 20 Muslim countries have given them a new narrative, and they’ve proven this generation will no longer passively accept the backward status their parents did. While political progress has been slow, the trial of Mubarak is a potent reminder that revolutions do have consequences.

4. Bin Ladenism is fading. With the anniversary of 9-11 now just days away, and with the death of Osama bin Laden still fresh in everyone’s mind, the trial is another benchmark in the fading appeal of Islamic jihadism. What did al Qaeda want, after all, than the toppling of Middle East dictators. They couldn’t pull it off, but the protestors did. In every Muslim country where polling is available, al Qaeda has been losing support precipitously in recent years. Even before his death, confidence in Osama bin Laden fell 42 percentage points in Jordan between 2003 and 2010, 34 points in Indonesia, and 28 points in Pakistan. In Turkey his approval rating went from 15 to 3; in Lebanon from 19 to zero. Hitler would poll higher. And now bin Laden is at the bottom of the sea.

5. Religion still shapes events in the Muslim world. The headlines this morning in Egypt read, “The pharaoh in the cage of the accused.” Ramadan started this week, meaning even most moderate Muslims will gather with their families, fast during the day, and feast at night. The sacred is in the air. The symbolic significance of the former ruling family, widely pilloried as having “pharaonic powers,” stripped of their hand-made suits and pricey jewelry, dressed in similar humble white clothing worshipers will wear on pilgrimages to Mecca later this month, will be lost on no one in the Muslim world. As Moses says to Pharaoh in the Koran, “You are not a god.” Today, more than ever, that lesson echoes in the Arab world.

This post first appeared on The Huffington Post.
Bruce Feiler’s latest book, Generation Freedom: The Middle East Uprisings and the Remaking of the Modern World, has just been published. You can follow him on Twitter at www.twitter.com/brucefeiler.