1. Why Did You Become An Artist?

The first image that comes to mind is of myself as a child with a pencil and a piece of paper in my hands.

It was just the most natural thing for me. I discovered that the best way to understand and interpret the world that surrounded me was translating everything into images. It became an internal need to explain, through figures, colors, and phrases, what I was feeling, learning, and thinking. I was able to express myself, through the artistic medium, much more than with spoken language. I found the deep meaning of my whole existence. Afterwards, I discovered that my work could also touch other people. The fascinating experience of standing in front of beautiful paintings in a Museum and turning the pages of art books reaffirmed my desire to continue to express myself with art as a communication tool.

I found out that being an artist is not a 9 to 5 job. One is an artist every hour of the day, and, of course, it is really not about the glamour, the fame, and the fortune. Art is simply the only thing I want to do from now until my last day, it is my most faithful and best companion.

2. Who are your influences? 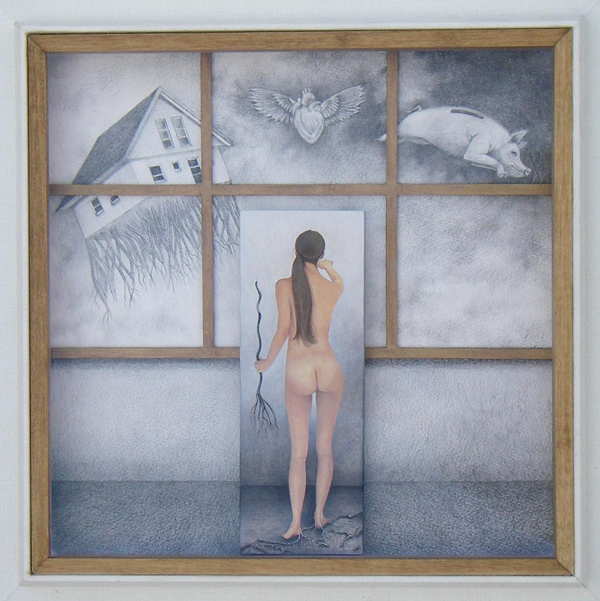 When I was a little girl, my grandfather introduced me to the arts. I used to enjoy art books of all kinds, especially ones depicting art from the Renaissance. Leonardo da Vinci and many Flemish artists became my most admired and influential guides.

Later on I discovered the work of Goya; his paintings offered me the most appealing images for my own aesthetics. Goya’s etchings, full of dark imaginary and dark humor, have been my biggest influence.

3. What are you working on now?

I have just opened a show at the Koplin del Rio Gallery in Culver City, California with my last works: a collection of small-scale mixed media assemblages consisting of the combination of 2D and sculptural aspects, with small format figurative paintings in egg tempera.

I have begun to work on sketches for my next project which consists of an altar piece in which I talk about the figure of Eve as the first mother of humanity.

The main themes are about motherhood, education, religion, the fear of becoming old, social roles, and the prevalent misconceptions about what a woman should or not be.

It will take a year or so for the altar piece to be completed as it will be constructed with several small format paintings and different assemblages.