“Page One” Documentary: The NY Times as a Stoppard Play

You couldn’t have had a more rapt audience for a movie filmed largely inside the NY Times’ newsroom than the attendees at the recent Investigative Reporters and Editors conference in Orlando, with whom I got an advance look last week at Page One, Andrew Rossi’s inside-baseball documentary (screening at the L.A. Film Festival June 22nd and 23rd) about the goings-on, over the course of a year, within a few marginal cubicles that constitute the Times’ Media Desk.

As I watched these Timesmen (emphasis on men) engage in the navel-gazing pursuit of reporting the news about their own industry, I kept thinking of Tom Stoppard’s 1966 play (which I saw in New York in 1968), “Rosencrantz and Guildenstern are Dead.” Stoppard hilariously brings to the fore the trivial trials and tribulations of those two minor characters in “Hamlet,” who are largely oblivious of the truly momentous events in Shakespeare’s drama, unfolding around them. (One of these bit players decides to become a major character: Tim Arango elects to take an assignment in Iraq.)

Just a few feet away from the absurdist antics of the movie’s chief protagonists—reporter David Carr and his merry band of media mavens—sat the true royalty of the Times, its investigative reporting team. The filmmakers never spoke with them.

And then there’s the paucity of women. Early in the film, when some historic black-and-white photos inside the Times newsroom flashed on the screen, Diana Henriques (a senior financial writer for the Times, of my women’s-lib vintage) and I turned to each other simultaneously and exclaimed, “No women!”

Little did we then know that the same charge could also be leveled at the film. While you did see females in the crowd shots and in the editorial meetings (where the incoming executive editor, Jill Abramson, was a presence but not much of a voice), you would hardly know that women play important roles in the newsroom. (Henriques, by the way, shared some great tips, at the conference’s book-writing panel, on how to create the kind of riveting narrative that enlivened her definitive book on the Madoff scandals.)

After someone complained that it appeared women were going to be short-shrifted in the documentary, the filmmakers called upon Susan Chira, the Foreign Desk editor, to be a talking head. Otherwise, the most prominent women in the movie are middle-aged and teary-eyed: They are vacating their desks, as victims of the staff’s finance-driven downsizing. (Come to think of it, why don’t we see any men being shown the door?)

The climax of the film was not executive editor Bill Keller’s congratulations, in a packed newsroom, for the latest crop of Pulitzer Prize winners (whose names we never learn). It’s the publication (on the eponymous “Page One” of the movie’s title) of Carr’s Oct. 5 exposé of dysfunctionality at the NY Times’ competitor, the LA Times.

That piece led off by focusing on the sexual pecadillos of the financially bankrupt newpaper’s executives. (I’m not sure why, but having written a couple of Op-Eds for the LA Times, for which I was paid in full, I keep getting the notices that they send to creditors.) [CORRECTION: The LA Times’ owner, the Chicago-based Tribune Co., not the newspaper itself, declared bankruptcy and the executives whose behavior was described by Carr came to the paper from Tribune Co.]

In one if its many fly-on-the-wall moments, the movie shows us part of the telephone conversation between Carr and someone at the LA Times, wherein he gives the rival paper a heads-up about the salacious details that he’s about to reveal. It was admittedly a story worth telling. But does it exemplify the NY Times at its finest?

At least the Pulitzer announcement gives us a chance, art-lings, to get a good look at the Times’ Renzo Piano-designed newsroom: 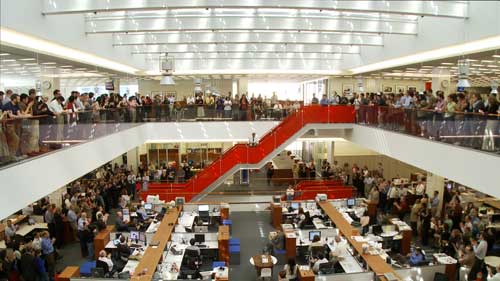